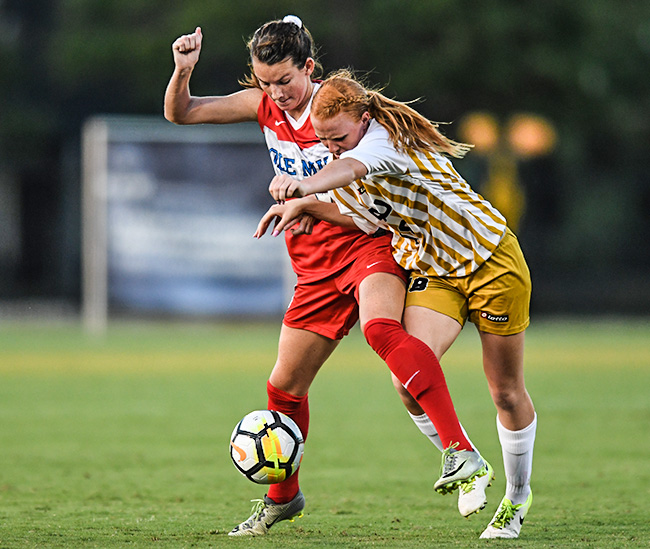 In all, six different players found the net including four newcomers. Junior CeCe Kizer got off to a great start with a hat trick in the first 30 minutes, while sophomore Alley Houghton pitched in with a goal and four assists to help lead the offensive attack.

Within four minutes, Ole Miss had the lead after freshman Chanel Thomas found Kizer, who struck with her left foot at the 3:57 mark. From there the two sides played scoreless for 27 minutes, before Kizer found her rhythm again. Within 22 seconds, it was quickly a 3-0 contest after Alley Houghton connected with her twice – once from the 18-yard box and another from about eight yards out – to secure the hat trick only 31 minutes in.

Two minutes later, at the 32:08 mark, freshman Grace Johnson received a beautiful corner from senior Bella Fiorenzo, heading it in for her first career goal making the score 4-0. That score held eight minutes, before freshman Alyssa Frazier flicked one in from straight away to make it 5-0. Two minutes later, Houghton, who already had three assists in the match, beat the keeper and chipped it in to the far side for a 6-0 Rebel lead.

The halftime lead would hold at 6-0, as Ole Miss posted 22 shots in the opening 45 to Alabama State’s three. After a fairly quiet first 15 minutes of the second half, the offense got rolling again when junior transfer Mary Kate Smith punched one in from the far side making it a 7-0 contest. Then, at the 76:59 mark, freshman Emily Holten found the net for her first collegiate score to cap the scoring for the night.

The Rebels applied pressure all night, finishing with a whopping 35 shots, which stands as the most in a single game since Sept. 10, 2010 vs. McNeese State. Seventeen of those were on goal, led by Kizer’s five on target. Sophomore Gabby Little had four shots and created a couple of dangerous opportunities near the net, while Houghton had three, all of which were on target.

Sophomore Claire Williams and the defense allowed only four shots by the Hornets, and she made two saves in her first collegiate action.