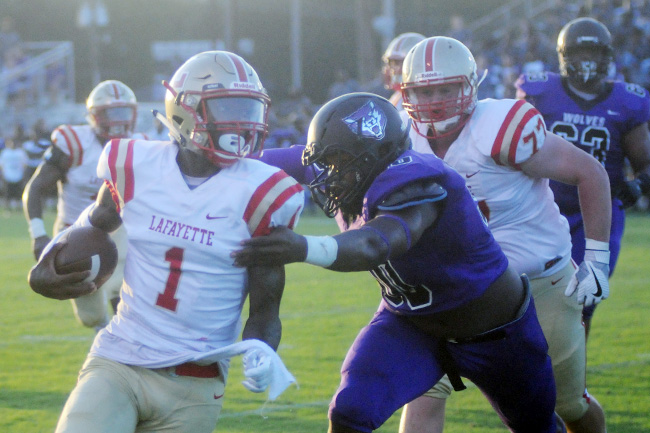 CLEVELAND — It was a historic night in the Delta on Friday, but unfortunately for Lafayette they were on the wrong side of it.

This was the first game in program history for the Wolves, who consolidated Cleveland High School and Cleveland East-Side this year.

“We made mistakes we normally don’t make,” Lafayette head coach Michael Fair said. “It was a great atmosphere here tonight. I don’t know, I was a little disappointed in our execution here tonight. What some guys who usually make plays, just not make them”

It was not an outstanding effort by the Lafayette offense. They Commodores only mustered 248 yards of total offense for the game. Only 38 yards of that were through the air as quarterbacks Brandon Turnage and Drew Dabney struggled to get the passing game going all night.

Running back duo Jamarcus Quarles and Jamie Shaw were the workhorses for Lafayette (0-1). They combined for 34 carries and 160 yards on the ground along with the Commodores lone touchdowns. Shaw was responsible for both scores with the first one coming on their opening drive with a one-yard run. The second score occurred late in the third quarter to tie the game at 13-all after a missed extra point try by senior kicker Robby Langley.

The ground game was also shaky at times, fumbling the ball four times and only recovering it one of those times.

“I thought that was the momentum that we needed,” Fair said of Shaw’s second touchdown. “We kind of set up that play with some stuff we had been doing on the outside. Those two backs, when we’re rolling they kind of feed off each other unlike any bunch that I’ve had.”

Lafayette’s defense did not allow Cleveland Central (1-0) to have consistent success throughout the game, but what thy did allow were big yardage plays by the Wolves which proved costly.

Immediately after the Commodores took the 7-0 lead on Shaw’s run, Cleveland Central responded on their very next play on offense. Senior running back Larry Tyler went 69 yards nearly untouched to knot the game back up at 7-all. After Shaw tied things back up in the third quarter, the Wolves once again responded with a long run. Senior Traveyon Craig run down the far sideline for 37 yards, followed by a two-point conversion from Tyler for the winning margin two plays into the fourth quarter.

Late in the second half, starting quarterback Brandon Turnage appeared to injure his lower leg or ankle. He was helped off the field and did not return. There was no early diagnosis after the game, but Turnage was seen walking around talk to teammates afterwards.

That caused junior Drew Dabney to take over the reigns. He kept Lafayette in the game but the play-calling was adjusted to fit his style instead of Turnage’s. Dabney finished the night with 42 yards on six carries and went 3 for 9 and 21 yards through the air.

“The whole second half we’re playing a guy who got half the reps at practice this week,” Fair said. “(Dabney) is a tough son of a gun. I thought he did a tremendous job. We just got some guys banged up and I thing Drew is fully capable. He can do a  lot of things for this football team.”

Lafayette returns to the road this Friday as they travel to Charleston.