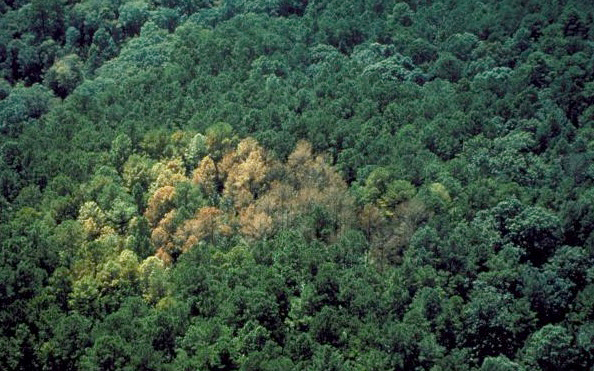 The U.S. Forest Service announced today that it has established an Incident Management Team to direct efforts to suppress southern pine beetle infestations that threaten to damage tens of thousands of acres of pine forests in Mississippi.

Forest Health officials have classified the level of infestations as a severe outbreak.

“This outbreak is unprecedented in scope with beetle activity progressing at breakneck speed with infestations rapidly escalating in size, coalescing, and decimating whole plantations,” said Jim Meeker, an entomologist with the Forest Service.

“We have put together a dedicated team of professionals to manage our beetle suppression and resource protection efforts as an incident. This approach provides an increased focus and additional resources as we work to protect resources on public and private forest lands,” said National Forests in Mississippi Forest Supervisor Gretta Boley. “We are working very closely with our state partner, the Mississippi Forestry Commission.”

The southern pine beetle, a native insect, is the most destructive forest pest in the South, both in economic and ecological impacts. In the absence of southern pine beetle suppression, large-scale pine mortality occurs, destroying endangered species habitat, recreation opportunities, timber, and other property values.

The southern pine beetle is a cyclical outbreak species, which becomes an area-wide and aggressive tree-killer during outbreaks. Scientists believe there are several reasons for this severe outbreak:

— An abundance of moderate to high-density pine stands, including more than 100,000 acres of unthinned loblolly and shortleaf stands that are highly susceptible to infestation by the insect.

— The inability to complete effective suppression activities in previous years.

Staff from the National Forests in Mississippi and the Mississippi Forestry Commission are working closely with the incident management team.

“Our crews are working very hard in some extreme conditions including rough ground terrain and excessive heat,” Boley added. “They are doing an excellent job. Carrying out our work safely is of the utmost importance.”

Ground saturation, including frequent pop-up showers, has also created a significant challenge to suppression efforts. Because of the amount of recent and continued rainfall, logging crews have limited ability at this time to operate heavy equipment. Forest workers are cutting infested trees to suppress the spread of the beetles and protect resources.

Cutting trees helps prevent spot growth by disrupting the beetle pheromone communication system and thus their ability to effectively aggregate and mass attack new pine trees. It is generally thought that most southern pine beetles die before they can colonize trees in a new spot, particularly in the summer when survival outside of the tree is short.

Foresters generally use one of two suppression methods: cut and remove or cut and leave. Cut and remove is the preferred and most effective suppression tactic because it eliminates all the beetles and their pheromone odors from the forest. Because of the markets and weather, cut and remove has not been available as an option.

For more information about southern pine beetles, go to www.mfc.ms.gov/SPB-Prevention.