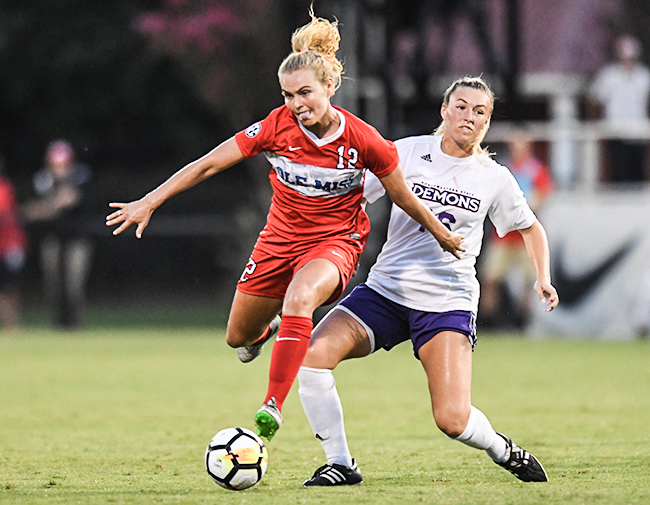 This time, it was freshman Channing Foster who found the net three times to lead the way. Behind her, CeCe Kizer scored twice, and Chanel Thomas and Julia Phillips netted their first career goals in a Rebel uniform.

Defensively, Ole Miss (2-0) was just as dominant as the backline and goalkeeper Marnie Merritt had to deal with just two shots, both of which came in the second half.

As was the theme in Friday night’s opener, the Rebels wasted no time finding the net just three minutes in off an own goal. Phillips, who went on to score later, had a perfect cross into the box before a Northwestern State defender flicked it in just past her own keeper for a 1-0 lead.

That score held for two minutes before Kizer netted her fourth of the season when Gabby Little dished out the assist and Kizer beat the keeper 1-v-1 from the 18-yard box to extend the advantage to 2-0. Seven minutes later at the 12:08 mark, a free kick came in from deep, before the keeper deflected it, both Kizer and Liza Harbin touched it, allowing Foster to propel a header for a 3-0 lead.

The freshman scored her second-straight just 11 minutes later when Mary Kate Smith crossed in from the far side, which opened up space for Foster to punch it into the right corner of the goal, pushing the Rebel lead to 4-0. That would last for only three minutes, before Thomas weaved through multiple defenders on the far side to net her first collegiate goal.

After the halftime break, Phillips increased the advantage to 6-0 when Smith put in a cross and she put up a header that drifted into the left corner. Just three minutes later, Kizer unassisted took a shot from 25 yards out that sailed into the right back corner for her fifth goal of the young season, and seventh on the night. Foster capped it off with her third at the 66:11 mark after controlling a defelction off an Alley Houghton assist.

Overall the Rebels posted 26 shots to the Lady Demons’ two, led by six from Foster, five from Phillips and four from Kizer. Ole Miss finished the contest with eight corner kicks while holding Northwestern State to just one.