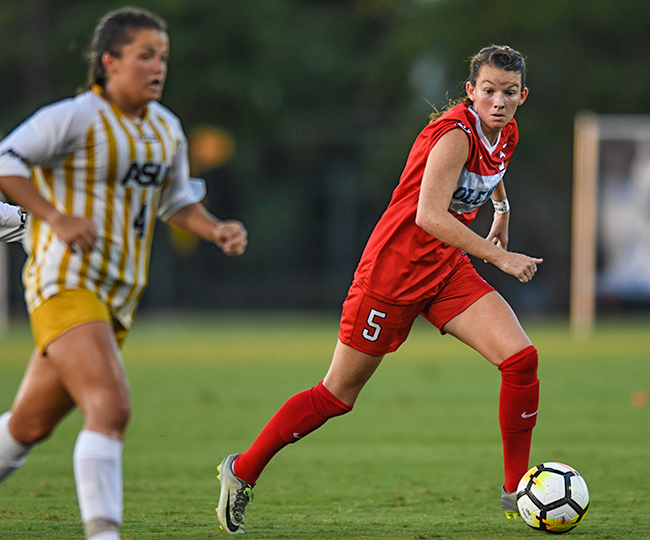 On the heels of a hat trick in the season opener, and two more goals in Sunday night’s victory, Ole Miss soccer junior forward CeCe Kizer has been named SEC Offensive Player of the Week, the league office announced Monday.

It is the third SEC weekly honor for Kizer in her career, after she was twice named SEC Freshman of the Week back in 2015. The Overland Park, Kansas, native put the gas pedal down from the first few minutes in Friday night’s opener, and hasn’t slowed down yet, already matching her goal total from the entire 2016 season.

Her efforts helped Ole Miss to a pair of 8-0 wins, only the second time in school history to score at least eight goals in back-to-back contests. The other time was in 1996. In Friday’s victory, the SEC Watch List forward had a hat trick just 31 minutes into the game, as she scored three minutes in, then posted goals within 22 seconds of each other to completely have her way against the Alabama State defense. She finished with six shots in that game, five of which were on goal.

In Sunday night’s win, she again showed her skill beating the goalkeeper 1-v-1 for her fourth goal, before punching a shot from 25 yards out to secure her fifth through two contests. She was also credited with an assist, pushing her point total to 11 on the young season.

Kizer and the Rebels return to action Friday night hosting Michigan at 7 p.m. at the Ole Miss Soccer Stadium.