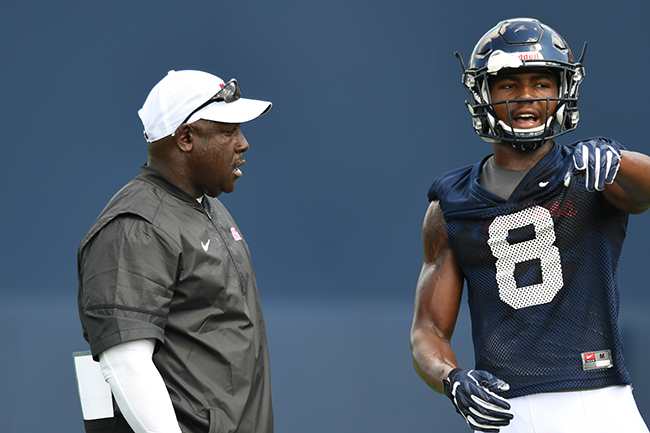 Defensive coordinator Wesley McGriff, left, listens to C.J. Miller (8) as the defense goes up against the scout team in Oxford, Miss. on Friday, August 18, 2017. (Bruce Newman, Oxford Eagle via AP)

Asked recently how often his group is getting to the quarterback during training camp, Ole Miss defensive line coach Freddie Roach pointed his answer in another direction.

It’s just one of the areas Ole Miss is continuing to try to shore up on a defense that’s looking to cut down on the frequency of big plays that contributed to last season’s collapse. Time to do that is running out with the grind of camp soon to give way to game preparation with the Rebels’ opener against South Alabama just two Saturdays away.

“We have to eliminate the explosive plays, both in passing game and in the running game,” first-year defensive coordinator Wesley McGriff said.

McGriff inherited a unit that finished near the bottom of the national rankings in several defensive categories a season ago, including 97th in sacks and 120th against the run. Fadol Brown, D.J. Jones and John Youngblood are gone from last year’s rotation up front, but a host of contributors in the front seven are back, including leading tackler DeMarquis Gates, Breeland Speaks, Benito Jones and rush specialist Marquis Haynes.

Qaadir Sheppard, now eligible after transferring from Syracuse, is expected to help bolster the sack numbers off the edge opposite Haynes along with Markel Winters, who had 17 sacks last season at Jones County Junior College, but Roach said the focus during camp has been trying to consistently win early downs in order to force opposing offenses into more predictable calls.

“If you look at championship-caliber teams, they stop the run,” Roach said. “Until we can do that, then we’ll take the next step with the pass-rush stuff.”

On the back end, McGriff said the primary focus continues to be preventing the deep ball, something Ole Miss often gave up a season ago. The Rebels allowed nearly 13 yards per completion while Auburn, where McGriff coached the secondary last season, yielded an SEC-low 11.03 yards per completion.

Ole Miss lost four contributors at cornerback off last year’s team but has some experience back in Ken Webster, Jalen Julius and Jaylon Jones, who combined to start 10 games last season. Myles Hartsfield has run with the first team there throughout camp after moving over from safety in the spring while McGriff is also getting a look at Jones and Webster at safety.

“Every day when we go out, the one thing we measure is who can keep the top on the coverage,” McGriff said. “If you eliminate explosive plays, then you have a chance to win.”

The Rebels are also playing a lot of press coverage under McGriff, which could leave Ole Miss vulnerable at times. McGriff began teaching a step-and-replace technique in the spring that helps the corners keep their leverage if executed properly.

McGriff said there’s been improvement, but It’s all a work in progress.

“We try to control what we can control and that’s the deep ball,” Jones said. “We work on our technique every day with our press and the conditioning we go through. I think it’s helping because that’s our main focus is limiting the deep ball.”