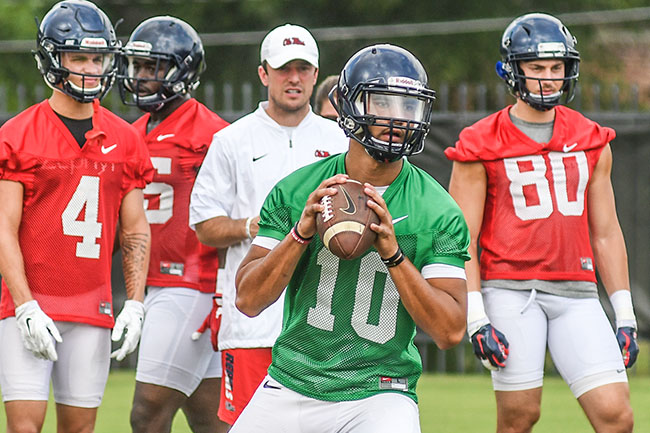 If things go according to plan, Jordan Ta’amu won’t take many snaps this season.

But Ole Miss’ backup quarterback is staying ready for whatever his role might be.

Ta’amu is working behind Shea Patterson, who’s entrenched as the starter with a skill set that’s already well defined despite his career being just three games old. Patterson’s quick release and pinpoint accuracy are staples of his game while the sophomore consistently showed a knack for keeping plays alive with his legs when they broke down late last season.

How the Rebels will use Ta’amu isn’t as clear, though the junior college transfer did enough in the spring to quickly take command of the second-team offense. He showed the deep-ball accuracy coaches spoke highly of in the Grove Bowl, going 6 of 11 for 188 yards with a 74-yard touchdown pass while running for another score.

“I just believe if I didn’t come in the spring that I wouldn’t be as fresh and as confident as I am now,” Ta’amu said. “Coming in the spring really helped me a lot getting to know the coaches and getting to be here for that new offense.”

Ta’amu said getting used to the tempo of first-year coordinator Phil Longo’s air raid system hasn’t been all that difficult after running a fast-paced offense at New Mexico Military Institute, where the 6-foot-2, 212-pounder accounted for 3,342 total yards and 39 touchdowns as a sophomore last season. It’s the speed of the SEC game that Ta’amu admitted has taken some getting used to.

“Everyone’s good here, everyone’s athletic, everyone’s fast and everyone’s big and fast, so I’ve just got to adjust to that and play my game,” Ta’amu said.

Ta’amu’s main focus in camp has been improving his accuracy, something he said he’s working on by getting in extra passes after practice. Interim coach Matt Luke said he’s noticed an improvement in that area from Ta’amu and also praised his athleticism, but it’s a sense of urgency Luke wants to see more of from his backup quarterback with the game moving much faster around him than it did in junior college.

“This is a fast game and you’re playing against d-linemen that can rush the passer, so you’ve got to make quick decisions,” Luke said. “I think that comes with just being comfortable, knowing what to do and getting the ball out.”

Last year’s backup, Jason Pellerin (29 carries, 90 yards, 3 TDs), was used primarily as a runner in short-yardage and goal-line situations before Ta’amu’s emergence allowed coaches to move Pellerin to tight end permanently at the end of spring. Ta’amu could conceivably do the same thing after rushing for 328 yards and seven touchdowns a season ago, but he’ll leave it to Longo to determine exactly what his role will be this fall.

“Even though I’m second string, I feel like I have a role to play in this offense.”