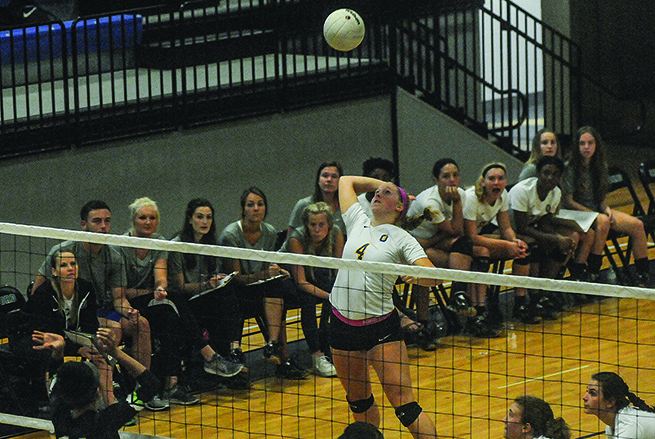 If Oxford wants to find themselves back in the playoff hunt come October, they will have to work on a part of their game that was lacking on Tuesday night.

“Our servicing and passes were pretty good, but we just had some things that weren’t coming together,” Oxford head coach Kacie Hengler said. “Our defense, we have to be consistent.”

Defense was in short supply for both squads in the first set, where Oxford (6-2) managed to score 23 points, yet Lake Cormorant had just enough to eke out the two-point margin for the early 1-0 lead.

There was a brief momentum change, which Oxford was the benefactor of when Lake Cormorant turned in an incorrect lineup for Set 2 and earned a free point before the set began.

Oxford ran with it, jumping out to a 10-1 lead and cruised to level the match at 1-set apiece.

The momentum would only stay briefly on the Chargers’ bench as Lake Cormorant (5-4) found what was working for them in the opening set for easy wins in Sets 2 and 3 to claim the match.

The Gators were led by senior Jastiny Suggs who had seven kills and five digs. Junior Olivia Williams finished with six kills and a team-high 11 digs.

Quick fix?
The issues Hengler, who is in her first-year with Oxford, noticed during the match and during spots of their other first seven matches is something she believes can be corrected. There is not a long-term concern, if her squad puts in the work.

“They kind of created some bad habits as a team just over the years,” Hengler said. “Defense wins the game and (Lake Cormorant) was scrappy and we weren’t. They just didn’t trust each other tonight. They didn’t trust themselves. …it’s definitely fixable. What’s great is that it’s not about ability. They know how to play defense. It’s just being disciplined and being where they need to be. That’s up to them.”

Oxford stays home for a match on Thursday when they host Middleton (TN) at 6 p.m.