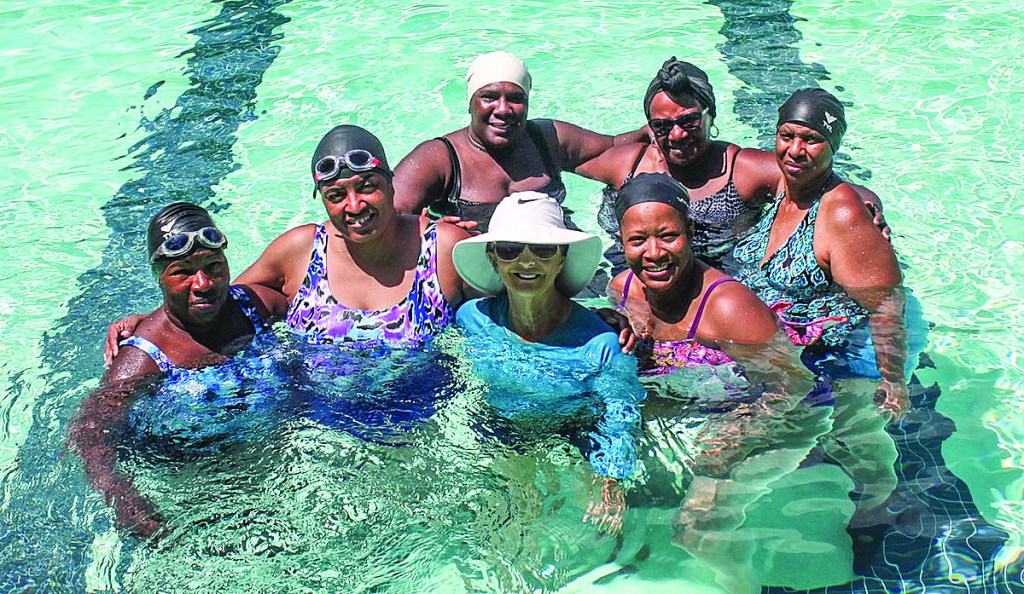 Lana Hand, center, has taught almost ten different women how to swim this summer after meeting a group of them at the Leisure Lifestyles water aerobics class. (Photo/John Davis/Oxford Park Commission)

A fear of the water and the inability to swim was overcome thanks to the kind nature of a woman who has spent a lifetime in the pool.

In June, Lana Hand noticed a handful of individuals taking part in the Leisure Lifestyles water aerobics class not leaving the wall.

Instead of floating and moving in the water like the rest of the class, these women were content to stay off to one side and move to the music while having their digits firmly planted on the tile that lines the lip of the pool.

Hand, a native of Vicksburg, has spent the past 50 years teaching others how to swim. After one class, Hand approached the ladies that “were hanging on for dear life.”

“I just went over to them and I said ‘I bet y’all don’t swim’ and they said no and they were scared to death of the water,” Hand said. “I told them I could teach them how to swim. They said they couldn’t and I just kept telling them that I had taught for 50 years and that my success rate was nearly 100 percent.”

The conversation made a difference and one day after class, Hand was actually able to teach the women for about 20 to 30 minutes after class.

The extra work has paid off. Instead of holding on, the women are able to float and perform more of the overall movements during class.

“Most of them are swimming, putting their face in and floating. It’s like a miracle happened,” Hand said. “You don’t have to swim to do this class, but they would not do certain things without holding on. Now they all get off the side and do everything.”

Some days, Hand teaches four women. Other days she instructs eight or nine. And all of the extra teaching revolves around their schedule. There were a couple of weeks during the summer that Hand wasn’t around. During that time, others from the class volunteered to keep up the teaching. One of those that helped out was Marian Barksdale.

“They are so appreciative. It’s such a blessing,” Hand said. “They were so petrified. They are still afraid, but they’re getting over their fear. This is a passion for me. I’m 70, but I went back to Vicksburg this summer and probably taught 50 or 60 kids this summer.”

Emma Gillom Ward is one of the members of the class who has learned to swim this summer thanks to the help of Hand.

“I have really enjoyed the Leisure Lifestyles exercise class and I thank the Lord for Lana for taking the time to show us how to swim,” Ward said. “She is excellent for showing us. And she didn’t have to do it. She’s volunteering her time to be with us and we really appreciate it.”

Ruthie Vaughn has also enjoyed the class, and meeting up with Hand.

Vaughn said she came into the class late, but the time spent has been well worth it.

“I think they started about two or three weeks before I came in,” Vaughn said. “I don’t know far I can go, but I know I can go farther than just being on the wall.”

Kris Brasher is the Aquatics Director for the Oxford City Pool. He has watched the women develop their swimming skills over the summer, and was just so thankful to Hand, and the others that have helped.

“It’s a great situation. And surprising. It happened unexpectedly that these ladies volunteered their time to help people that have waited this long in life to learn how to swim,” Brasher said. “It’s just a great addition to what we were already offering here. It’s just great to have eight to 10 people who are age 60 or so learning how to swim. It’s a great bonus. They were scared to get off the wall when they first got here and now, they’re able to participate and out in the pool and getting the full benefit of the class.”