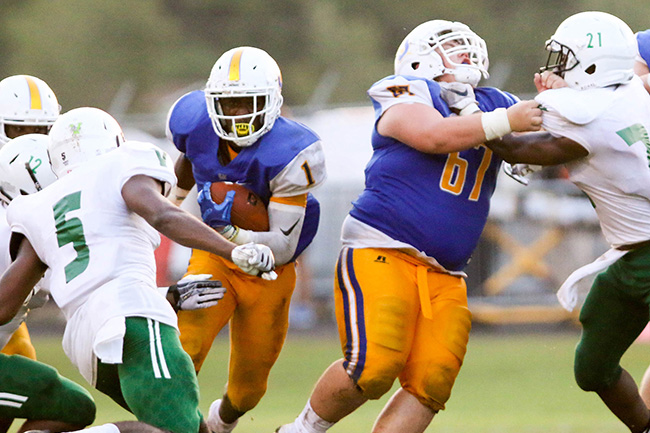 Oxford running back Hiram Wadington (1) tries to get through the line Friday against Vicksburg. Wadington rushed for 145 yards and scored two touchdown as the Chargers won 21-6 in their season opener. (Walter Frazier/For The Vicksburg Post)

It has become a precursor for what is to come in November.

The Little Egg Bowl, as it has become known, features Oxford and Starkville in a showdown of towns that house the rival Southeastern Conference schools of Ole Miss and Mississippi State.

Much like the Egg Bowl, this series has been known to be streaky and lately the streak resides with the Yellowjackets. Starkville has won the last three matchups dating back to 2014. The last time Oxford won was in 2013, a year after Starkville defeated them in the second round of the 2012 Class 5A playoffs.

This series has been all Starkville on the field, but it does not dampen the excitement for Oxford.

Each team is carrying momentum into what has been dubbed as a ‘game of the week’ by many of the state-wide publications. Oxford is riding a high after defeating Vicksburg 21-6 in the Red Carpet Bowl last week while Starkville handled business with a 45-3 win over Noxubee County.

The Yellowjackets (1-0) are coached by first-year head coach Chris Jones. Jones replaced Ricky Woods, who went back to his old job at South Panola — after a having a cup of coffee at Eupora last Winter.

“Offensively, it start with (Brown),” Cutcliffe said. “He’s a very, very talented player. A dual threat guy. I think it starts with him, but he’s got weapons all around. …they make you defend the entire field.”

It will be another challenge for the Oxford defense, that has struggled to keep Starkville off the board during this series. They had a good opening performance last week, shutting out the Vicksburg offense. It will be a much taller task this week against the Yellojackets, but also a good measuring stick of where Oxford stands amongst the giants of Class 6A two weeks into the season.

“We’re playing a great opponent,” Cutcliffe said. “Somebody with a great program, great tradition. But at the same time, in this non-district portion of the season, we look at it as one-week seasons. We’re just trying to go 1-0 this week, improve and move on to the next week.”

‘No panic’ for Lafayette after opening loss