With ‘everything under one roof,’ Ole Miss volleyball sticking together at renovated Gillom Center 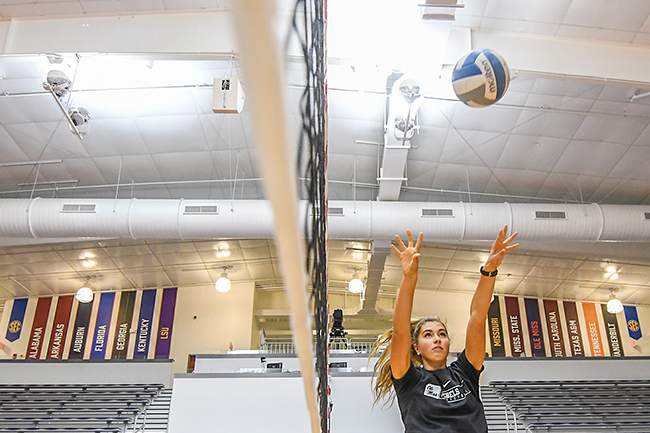 Kate Gibson and Lexi Thompson shake their heads a bit while reminiscing about how it used to be.

They tell stories of how they and their Ole Miss volleyball teammates would practice at one place and go to a different part of campus once it was over to continue their training, often trying to all pile into one car with parking scarce in the middle of the day.

“We always tried to do the bare minimum of moving things that we had to,” says Gibson, an outside hitter.

That’s not an issue anymore.

Ole Miss will begin its season Friday against Louisiana Tech in the newly renovated Gillom Sports Center, a building volleyball now has to itself. The facility previously housed locker rooms and offices for the volleyball, softball, soccer and rifle teams and included three indoor tennis courts, but the renovations, which totaled more than $11 million, did away with those courts, pushed capacity to more than 1,000 and brought all of the volleyball team’s amenities under one roof.

That includes a weight room, a training room, hot and cold tubs, two video rooms and a video board that was brought over from C.M. “Tad” Smith Coliseum. Volleyball’s game and practice courts, which sit side by side, were also reconfigured to give approximately 12 feet of extra space between the two, which has made practices safer.

“Those were shared by a pole in the middle, so it wasn’t just real safe to do quite a few drills during practice because people were so close to each other,” says coach Steven McRoberts, who’s set to begin his fourth season at the helm. “We had to be really careful with what we were doing.”

The renovations, part of the school’s Forward Together fundraising campaign to enhance many of its athletic facilities, began last year and weren’t completed until this summer, forcing the volleyball team to play last season’s matches in The Pavilion, which opened in January 2016 as the basketball teams’ new home.

The team had everything it needed at the new $96.5-million facility. Before that, players would practice at the Gillom Center before making the drive down Hill Drive to the Starnes Athletic Training Center to lift weights or get treatment. Driving, parking and changing clothes would sometimes take 20 minutes if not longer depending on the time of year, Gibson says.

Having everything in one place has helped the players make up for lost time, something Gibson and Thompson say shouldn’t be taken lightly as Ole Miss tries to take the next step as a program. The seniors are two of four full-time starters back from a team that put together its third straight winning season under McRoberts last fall but has yet to make the NCAA Tournament.

“I think our team chemistry and atmosphere is going to be a lot different than it has in the past,” Gibson says. “I think that all goes to the time we’ve had to be able to bond and get to really know each other. Even with the coaching staff, I think we’ve become so much closer as a team to where with each other we’re going to be a lot more energetic and want what’s best for each other.”

McRoberts expects the facelift to the facility to give his program a recruiting boost in the future, but he says being a part of the postseason would be equally as helpful. The Rebels’ hope is a building they can finally call their own gives them a push in that direction.

“It’s just amazing to know this facility is ours and it brings in a completely different environment,” Thompson says.