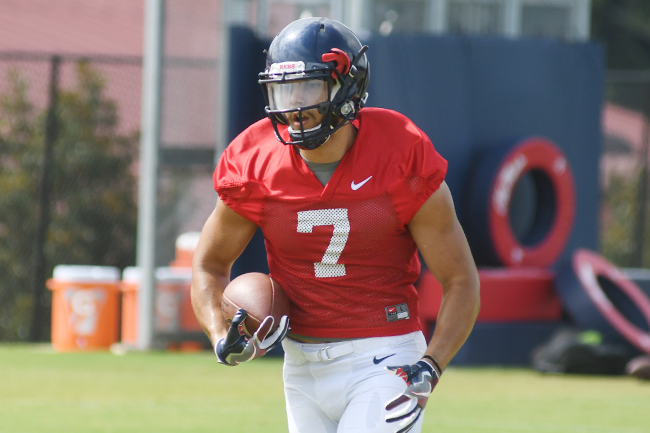 Things are different for Jason Pellerin, which has become somewhat the norm.

Pellerin is still trying to get accustomed to some aspects of his new position. Less than a year after serving as Chad Kelly’s backup at quarterback, Pellerin has gone from slot receiver in the spring to tight end during Ole Miss’ training camp.

“Obviously I’ve got a lot to work on,” Pellerin said. “This is my 18th day at tight end, but I feel like I’m adapting to it well and now it’s just more technique than the physical part and doing it consistently every single play.”

A more realistic chance to see the field is something else Pellerin is having to get used to. First-team tight end Dawson Knox missed significant time in camp with a foot injury that interim coach Matt Luke said is still being evaluated and may keep Knox out of the Sept. 2 opener against South Alabama if not longer.

Pellerin has gotten some first-team reps in Knox’s absence. Walk-on Ty Quick, sophomore Octavious Cooley and redshirt freshmen Gabe Angel and Jacob Mathis are also working at the position, though Angel and Mathis have been slowed by minor injuries.

Pellerin knew better than most he had to stay ready.

“The things I learned at quarterback is that last year with what happened to Chad, at any given play and any moment, it’s your time to step up,” Pellerin said. “You’ve got to prepare the right way every day of the week and weekends. … I think I’m ready for it.”

Pellerin, an option quarterback at Louisiana’s New Iberia Catholic, was used primarily as a runner in short-yardage and goal-line packages last season as a redshirt freshman, throwing just 22 passes in nine games. When prized freshman Shea Patterson’s redshirt was pulled for the final three games after Kelly went down with a torn ACL, the signs were there that Pellerin wasn’t long for the position.

But former coach Hugh Freeze called Pellerin one of the Rebels’ top 22 players in the spring and wanted to utilize his skill set in some capacity, prompting the initial move to receiver. Pellerin’s move to tight end is a permanent one — and one he’s taken in stride.

“A lot of people, they probably have a negative mindset about it and are stubborn about it, saying, ‘Oh, I want to play this and I want to play this,’” Pellerin said. “With me, I was just open to playing whatever. Whatever they see best for me, I have to trust in their plan and just do whatever they ask me to do.

“Change is pretty fun. A lot of people don’t agree with that, but going from quarterback to tight end, I knew most of the mental part of the game, so I was stress-free with that.”

Being on the receiving end of passes and running routes also came somewhat natural to Pellerin, who also spent some time at receiver in high school. It’s the blocking that Pellerin still has to hone.

“I think he’ll be fine outside,” Luke said. “For him to really be effective for us, we need him to be physical in the box and be able to block power and iso (runs) and do some things in the box. That’s really what he’s been focused on.”

The 6-foot-4, 237-pound Pellerin said he’s leaned on Knox and others at the position to help with his technique. It’s still a work in progress, but he’s learned that hand placement and leverage can go a long way in neutralizing defenders of any size.

“If you’re the lower man and have good hand placement, you have a good chance of winning,” Pellerin said.

How well Pellerin can hold up in the run game will determine how often he’ll stay on the field. Being a part of as many formations and packages as possible would be ideal for the sake of unpredictability.

“You could always be in 10 personnel (with no tight ends and four receivers), but you want to have a tight end in the game where you can do both,” Luke said. “And you need a guy that can do both.”

Pellerin said he’s at a point now where he’s comfortable doing whatever he’s asked at a position he can finally call home.

“I feel extremely confident in my ability and the coaching that I have,” he said.