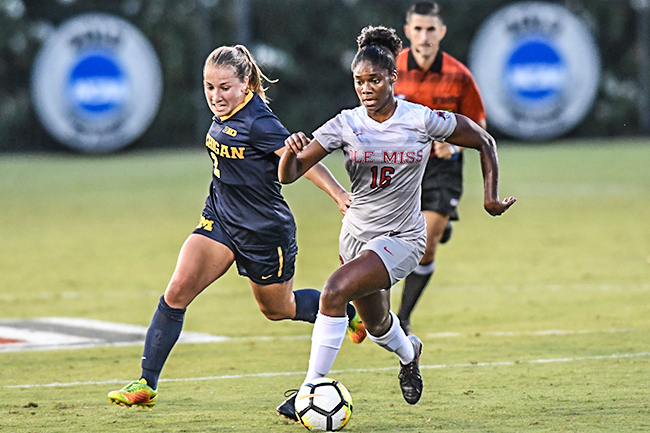 Ole Miss' Gabby Little (16) dribbles upfield against Michigan's Abby Kastroll (2) at the Ole Miss Soccer Stadium in Oxford, Miss. on Friday, August 25, 2017. Little scored in the 57th minute for Ole Miss in a match that ended in a 1-1 draw.

Ole Miss and Michigan ended in a 1-1 draw after double overtime at the Ole Miss Soccer Stadium on Friday.

Michigan got on the board first in the 7th minute on a header by Taylor Timko. The Rebels’ Gabby Little tied it up in the second half.

The Rebels finished with 19 shots on the night, including a team-high five from CeCe Kizer, who put three on target. Ella Johnson had four and recorded the lone assist, while Little posted three attempts. Both sides took nine corners, and goalkeeper Marnie Merritt made three stops in goal.

Ole Miss’ next match is at home on Sunday against Lamar. Game time is 2 p.m.