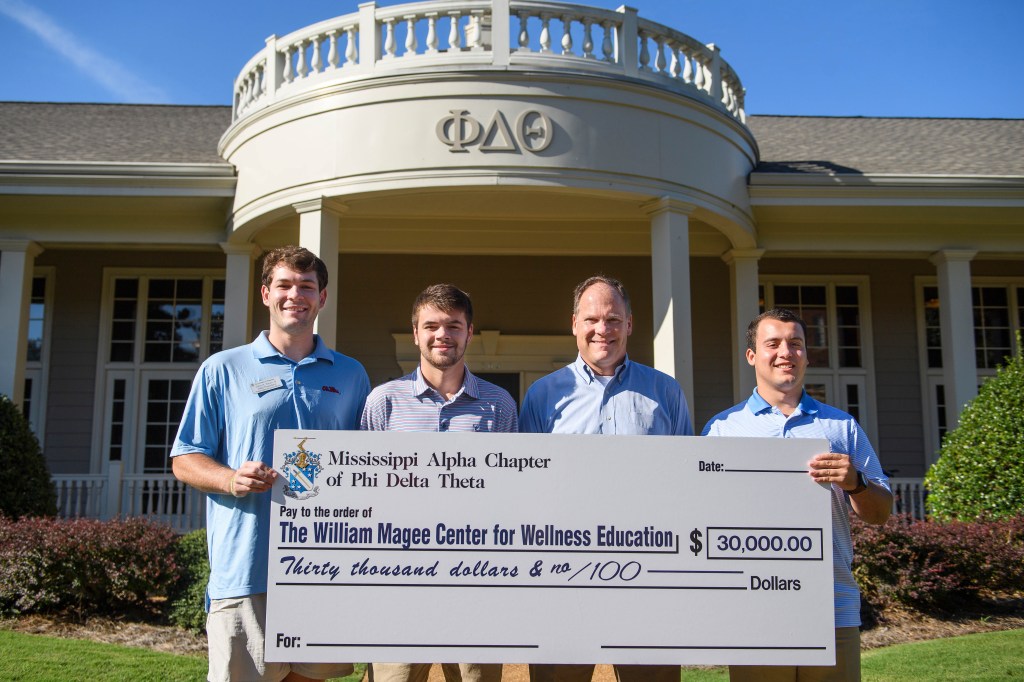 The Phi Delta Theta fraternity at Ole Miss has made a major financial commitment to the just-announced William Magee Center for Wellness on the Ole Miss campus.

The wellness center is being created at the university to support student drug and alcohol education.

An Ole Miss IGNITE fundraising campaign for the Magee Center is underway and the Phi Delt fraternity gave it a significant boost with its major financial commitment of $30,000.

“The men of Phi Delta are thrilled to play a part in bringing the William Magee Center for Wellness Education to The University of Mississippi,” said Guy Thornton, a Senior Accountancy major from Hattiesburg who currently serves as the Phi Delta Theta chapter president. “Each day, we seek to instill the cardinal principles of Phi Delta, friendship, sound learning, and moral rectitude, not only amongst our brothers but also throughout our university family.

“Alcohol, drugs, and depression are all significant issues on college campuses across the country, and Ole Miss is no exception. We are excited to see our University leadership lead this charge and we are happy to support it. We hope our donation will encourage our brothers and others to get involved with alcohol and drug education.”

“I am so moved by their leadership,” Magee said. “This is prayers being answered.”

Alcohol and drug misuse is a serious concern on college campuses everywhere, including Ole Miss.

While the problem may be the same on every campus, the university’s approach to finding a solution is different. Guided by the latest research, and with creativity and innovation, the university believes an interdisciplinary focus with the new wellness center can change student behavior.

“We’re excited to play a part in the legacy that the Magee Center will leave for students,” said Dion Kevin, a senior from Oxford who currently serves as the ASB President on campus. Kevin is also a member of Phi Delta. “The University of Mississippi is an institution committed to preparing young adults through education and immersive experiences.

“With the addition of a resource like the William Magee Center for Wellness Education, students will be given the opportunity to learn, grow, and recover in an environment where they feel safe and welcomed. We encourage similar gifts from the campus community that will contribute to the success of not just the Magee Center, but more importantly the students of Ole Miss.”

The Phi Delta Theta fraternity’s financial commitment helped inspire other donors and the Magee Center’s IGNITE campaign has raised more than $87,000 in just over a week.

A group of founding members including Diane and Dick Scruggs, The Oxford Treatment Center (American Addiction Centers), Cris and Jay Hughes, Becca and Phil Mehlin, and the Sigma Nu and Kappa Alpha fraternities had joined Kent and David Magee in providing initial funding to establish the William Magee Center for Wellness Education.

The Magee Center had $500,000 and a deferred gift of $850,000 committed before the launch of the IGNITE campaign, which is still underway.

Others who have made significant contributions to the William Magee Center for Wellness Education during the IGNITE campaign include Ginger and Quentin Whitwell of Oxford, Rosie and Steve McDavid and family of Oxford, and Lesley and Rush Mosby of Jackson.

“The momentum is building,” Magee said.

The center is named in honor of the late William Magee, the son of David Magee, EAGLE Publisher. He was a former Ole Miss student in the honors college, the Croft Institute, on the Rebel track team, and in a fraternity. William died after graduation from an accidental drug overdose.