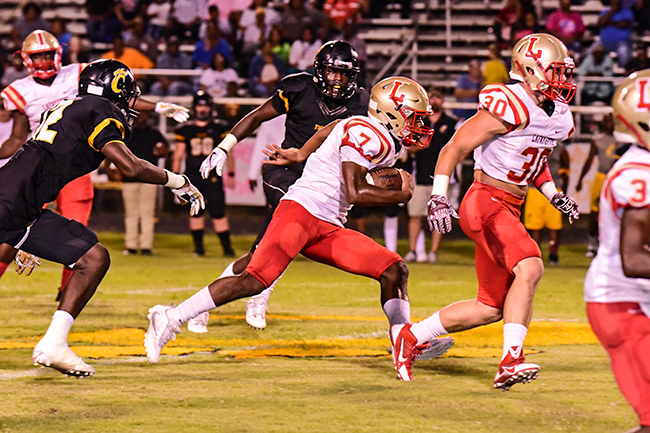 CHARLESTON — Two weeks in class 5A, two tough losses. With a 38-14 loss to the Charleston Tigers, The Lafayette High School Commodores have gotten off to a slow start, much like they did in the previous season.

While the 0-2 record may seem daunting to the Commodores, the loss was not without its bright spots, with the team rushing for 310 yards on the day. Overall, the Commodores were unable to bounce back from a few early mistakes that gave Charleston a chance to pounce on the lead.

“We dropped the opening kickoff and as crazy as it sounds it kind of went downhill from there,” Lafayette head coach Michael Fair said. “Its just one of those things.”

Fair cited the team’s own shortcomings as a critical factor in the loss.

“We didn’t execute well on either side of the ball,” Fair said. “Missed tackles, ball security, missed blocks, you name it. Whatever we could do to hurt ourselves and dig a hole, that’s what we did.”

Lafayette was able to strike back after senior Jamarcus Quarles broke off a 62 yard run that later set up a 6-yard touchdown by junior Jamie Shaw.  Unfortunately for the Commodores, there was still enough time for the Tigers to march down the field and put another touchdown on the board.

At the start of the second half Charleston moved down quickly and scored once again, but the Commodores were still within striking distance. A few plays into their drive sophomore phenom Randy Anderson broke off a long run but had the ball stripped from him near the goal line. Charleston really took over the game after that play but Anderson was able to find paydirt on a 20-yard scamper later in the game.

“I thought we really had some success running the ball throughout the night,” Fair said. “Break one and fumble it, or get a holding call. Miss an assignment here or there and we can’t sustain a drive and that’s just kind of what it turns into.”

Lafayette will have their work cut out for them after the 0-2 start, but one of the things Fair emphasized to his team after the game was that they had made it through this situation last year.

“It’s a challenge, but we’ve been here before,” Fair said. “We’re going to rally these guys and get back to work, and we’re going to find eleven guys that really want to play football, and that’s what we’re going to go to war with next week.”

Lafayette will get off the road this week for their first home game of the season, hosting North Panola.