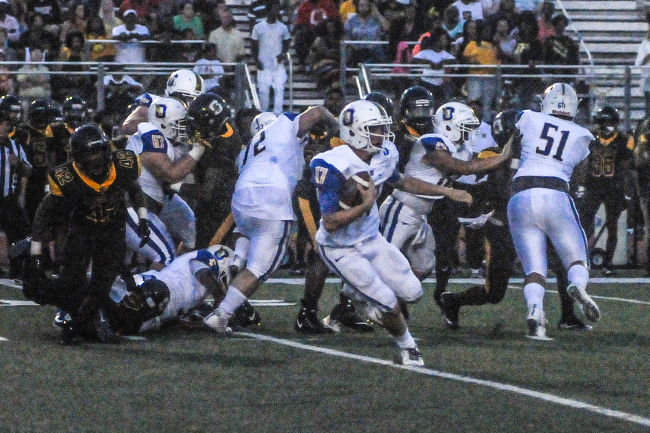 STARKVILLE — Things looked bleak for Oxford midway through Friday night’s game. Then a young sophomore quarterback came into the game and everything changed. Chargers’ John Mark Meagher used his legs, and his arm, to bring Oxford back from a 14-point deficit, but it was not enough as Starkville claimed their fourth consecutive Little Egg Bowl victory with a 28-21 win in double overtime.

A back-breaker of a play came right as the first half ended. Starkville quarterback Malik Brown hit Rufus Harvey on a 42-yard pass to the back of the end zone, giving the Yellowjackets (2-0) the 14-0 lead.

There no panic in the visitor’s locker room.

“What I was saw a bunch of guys being positive and really encouraging each other,” Oxford head coach Chris Cutcliffe said.

The halftime moral carried over to the second half for Oxford (1-1) when Meagher stepped in at quarterback, replacing starter John Reece McClure. Meagher was only 5-for-11 through the air for 79 yards, but the sophomore did most of his damage on the ground. He gouged the Starkville defense for 91 yards on 10 carries, second only to running back Hiram Wadlington’s 105 yards on 20 carries.

“I really just went out there and reacted,” Meagher said. “I try not think too much about it. It’s definitely a lot quicker in a game than practice, but I just try to go out and do what I can do and help the team win. …if a hole opens up I like to tuck it and run it.”

Meagher’s first touchdown pass of the night came late in the third quarter, hitting JJ Pegues on a 31-yard pass to cut Oxford’s deficit in half. Things remained a one-score game the majority of the fourth quarter until Meagher struck again. He hit DeDe Pegues on a five-yard slant and the game was knotted at 14-all after a Jack Tannehill extra point with a minute and 24 seconds left.

“When (Meagher) gave us the spark that’s what we went with,” Cutcliffe said. “It’s not a knock on John Reece. They’re both pretty talented guys. It’s a good thing to have more than one guy who can play.”

Starkville punted away and Oxford took a knee to run out the clock and send the Little Egg Bowl to overtime for the first time in the series.

Sam Bianco scored on a four-yard run for Oxford and Starkville responded on their first play of their overtime possession when Harvey caught a 10-yard pass from Brown to force a second overtime period. Starkville scored on a KJ Lawrence run and Oxford was unable to respond when Meagher’s pass on fourth down fell incomplete to end the game.

Starkville had opportunities to put the game away early, but turnovers kept Oxford in the game. The Yellowjackets had four fumbles, stunting positive offensive drives that got inside the Chargers’ 30-yard line on three of them.

Senior linebacker Quentin Wilfawn finished with a game-high 13 tackles, giving him 28 through the first two games.

“Defensively, I thought our guys fought so hard all night,” Cutcliffe said. “We gave up some yards here and there, but when our backs were against the wall we kind of stepped up and forced turnovers and got big stops.”

After lengthy road trips to Vicksburg and Starkville to start the year, Oxford returns home for the first time this year to host Grenada on Friday.