The Voice of Ole Miss: David Kellum reflects on 40 years in local radio 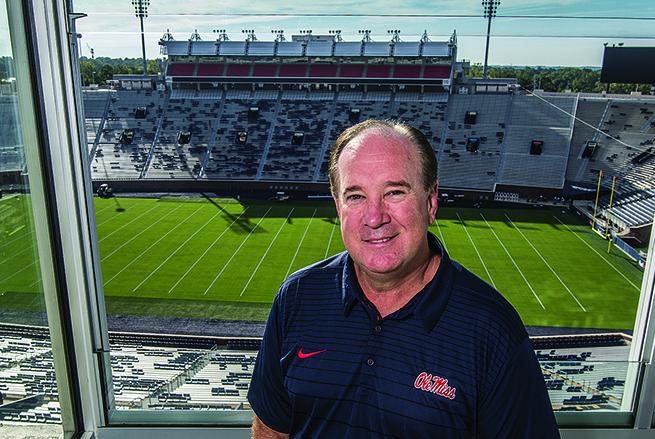 David Kellum, at Vaught-Hemingway Stadium on Friday, has been the radio announcer for Ole Miss football since 1989. (Bruce Newman)

For decades, David Kellum has been a mainstay on the airwaves as the voice of Ole Miss.

But what if he had taken a different path?

It could have happened. The odds were slim, but the Lafayette County native had a choice to make when he was young: to take the route of theatre — his mother, Helen Kellum, along with relative and longtime actress Sela Ward have theatre backgrounds — or pursue his love of sports through another, as yet unknown, avenue.

Kellum’s decision came down to passion.

“I had a little crossroads,” Kellum said. “The theatre life is tough. It’s really difficult. It’s hard to break in. We do have family that’s out there and doing really wonderful things. I kind of got to the point where (I said) ‘OK, do I want to really pursue theatre or go on and pursue the sports side. I just loved sports too much and went that route.”

Kellum and the rest of the Lafayette High Class of 1977 just celebrated their 40th anniversary earlier this month, a month that also coincides with his beginning his career behind the microphone.

Kellum and his classmates were the first students to attend Lafayette from first through twelfth grade, though Kellum entered Lafayette halfway through his career as a student as he transferred from Oxford to Lafayette Middle School in sixth grade.

It was at Lafayette where Kellum met the man that jump-started his radio career; Rick Mize.

Mize and Kellum’s relationship stretches beyond the airwaves, with the two forging a friendship built on their early interest in theatre and a love of radio.

“We were just like-minded and shared creative interests,” Mize said of how the two gravitated toward one another.

Diamond Dave
Through a gateway drama program at Lafayette, Kellum and Mize, along with James Smith (later known as Jim Martin in the local radio scene), ran into Robin Parker.

Parker was in charge of the program and while visiting Larson’s Big Star grocery store and it was there that she asked if they would be interested in a high school radio show.

The group wanted to be ‘worldwide disc jockeys’ like Rick Dees in Memphis and others of the time and created a sample radio show called LHS Today, which included a song of the week, school news, sports updates and even a short skit created by Smith.

They pitched the idea to Mel Chrestman who ran WSUH, a local radio station in town. Chrestman liked the show and scheduled it to run once a week as a 15-minute program.

“I don’t know why anyone would agree to that,” Mize said. “We used the theme from “SWAT,” that was our opening theme. I still hear it to this day and I expect to hear David, myself or Jim come on and say ‘Welcome to LHS today.’”

WSUH was the AM radio station affiliated with Miss 98 and the trio worked at both stations. As part of their job they each created on air personalities for themselves.

Kellum came up with the name Diamond Dave and later transitioned to Dave Dallas when he began spinning country records on Miss 98. When Kellum began working at the local rock station at night, he kept it simple with the moniker David K.

Finding his calling
The summer before Kellum’s senior year at Lafayette, Ole Miss hosted the Southeastern Conference baseball tournament. While sitting in his mother’s office on campus — she was a theatre professor — the manager of the campus radio station walked into her office saying he was searching for someone to call the games.

Kellum gladly stepped up to the plate.

“He said, ‘who are you?’” Kellum said with a laugh. “I told him I’m David Kellum, Mrs. Kellum’s son. He thought I was an Ole Miss student. I was not, I didn’t tell him. So, as a high school senior, I called the SEC baseball tournament for the campus radio station.”

To this day, Kellum has never found anyone who heard his broadcasts of the games as school had ended and the campus was nothing short of a ghost town in late May.
At the time, the campus station’s call sign was WCBH and they affectionately called it ‘We Can’t Be Heard’, Kellum said.

Following that baseball tournament,  Kellum was hired by the station and started calling some more baseball and women’s basketball games. During his freshman year of college, Kellum also went back and called the Commodore football games.

“That was kind of crazy,” Kellum said of going back and calling his alma mater’s games on Friday nights. “I played with them the year before. It was kind of crazy to get that opportunity that young of age. Plus, I was a Lafayette homer at that point.”

From 1978 to 1988 Kellum did Ole Miss baseball and women’s basketball along with Lafayette football games, and some Oxford games sprinkled in. He also spent three years calling games at Northwest Mississippi Community College in Senatobia.

And then Kellum got the call he had been waiting for.

On that call, Steve Davenport told Kellum he was the new voice of Ole Miss.

“(Davenport) said, ‘David, I’m going to make your day’, because he knew I wanted (the job) someday,” Kellum said. “ He said ‘today, you are the voice of the Rebels.’ I about fainted. I told him I was very grateful and moved with it from there. It’s kind of unusual, a lot of the other schools don’t have somebody from their school. …I think being here and doing a pretty decent job, up to that point, I guess allowed me to move into the lead role.”

Kellum has been the play-by-play man for Ole Miss football, basketball and baseball ever since.

Honing his craft and skills on the microphone has been a constant work in progress.

Growing up as a Cardinals fan, Kellum used the styling’s of Jack Buck as well as longtime Dodger’s radio announcer Vin Scully who he would listen to late at night when he was supposed to be asleep. He also listed to Memphis announcer Jack Eaton, Stan Torkelson at Ole Miss and even Jack Cristil at Mississippi State.

“I always had the desire to do play by play,” Kellum said. “I kind of pulled some things from different people through the years. I kind of developed my own style quickly. I was probably a little bit more aggressive and over the top than announcers at that time period. And now, everybody is that way it seems like. I’ve toned it down. I’ve controlled myself a little bit more now as I’ve become a veteran announcer I guess.”

Love of the game
Kellum juggles all three sports, with help from the likes of Richard Cross and others when the seasons overlap. It has become a juggernaut of a task from early September until early May or June.

While he is no longer at the beginning of his career, there is not a sunset in sight for Kellum.

At 58, he isn’t ready to hang up the headphones and pass over the mic.

That decision will come down to realizing the passion is no longer there.

“Folks will ask me, ‘You’re not going to retire on us are you?’” Kellum said. “I don’t know if they want me to or not. But I think the fan base is pretty comfortable with me as their announcer. It’s all about the passion. Doing three sports is difficult. …I have a tremendous desire. I don’t know if I’ll go real, real deep (in age). There’s a lot of other things I like to do, too.”