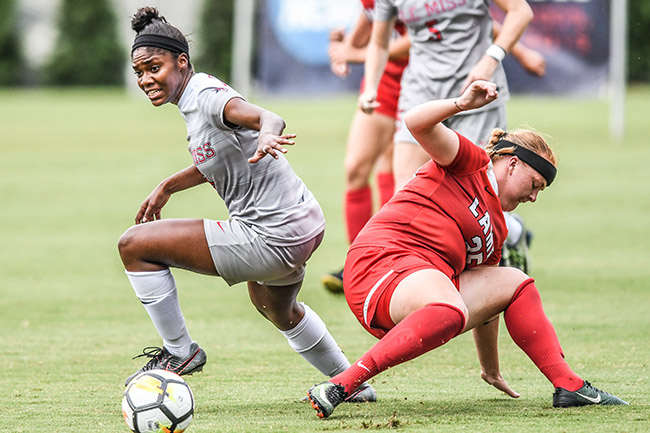 Ole Miss defeated Lamar 3-0 on Sunday at the Ole Miss Soccer Stadium in a match that was delayed by lightning and rain.

The Rebels (3-0-1) were supposed to be on the road at Louisiana-Lafayette, but the effects of Hurricane Harvey forced the cancellation of that game in Louisiana. Instead, Ole Miss scheduled the Cardinals (2-2), coached by former Rebel head coach Steve Holeman, in what was their fourth of six-straight at home to begin the season.

A first half goal from Grace Waugh put the Rebels in front 1-0 at the half, before Channing Foster and Molly Martin both found the net in the second period.

After starting the match at 2 p.m., teams were called off the field just six minutes in after lightning was detected in the area. The two sides would remain in the locker room for two-plus hours after multiple lightning strikes and rain, before play resumed at 4:22 p.m.

Following the delay, it would be 28 minutes before Ole Miss found the net first. Foster charged near the end line before crossing into the box when Waugh collected it and put the Rebels in front 1-0 in the 35th minute. That score held up until half, in which Ole Miss outshot Lamar 9-2.

The second period was highlighted by a pair of goals, and two saves that were just as impressive from goalkeeper Marnie Merritt. Just a minute into the second half, she dove to her left to block a Lamar attempt, then covered the deflection to save a goal.

Four minutes later, Foster dribbled her way through traffic and hit one left-footed left of the keeper, increasing the lead to 2-0. Then, in the 57th minute, Lamar had a player with space straight in front of the goal, but Merritt made a miraculous dive to her right keeping the Cardinals off the board.

Molly Martin, in the 79th minute, went on to punch a header through off a cross from Mary Kate Smith, capping the scoring at 3-0 to seal the victory.

Overall, the Rebels finished with 23 shots to Lamar’s six, while Merritt was credited with three stops in goal.

Up Next
Ole Miss hosts High Point next Friday at 7 p.m., before playing host to in-state foe Southern Mississippi at 4 p.m. on Sunday.