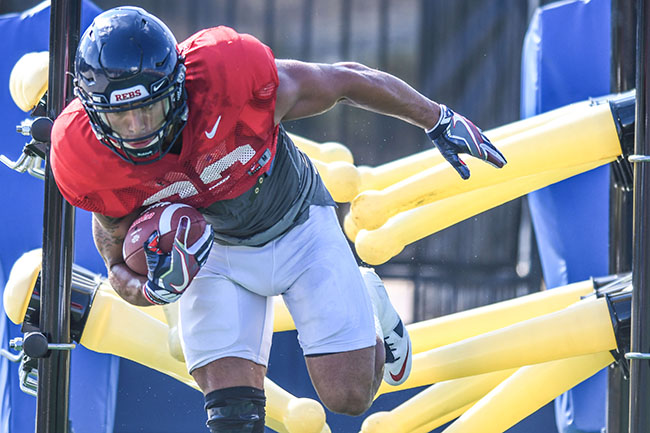 Competition, injuries and off-field incidents still have some things up in the air, but here’s an updated look at where the depth chart stands as Ole Miss enters game week.

Patterson had to learn a new system when Phil Longo was hired away from Sam Houston State in December to run his air raid offense, but it’s been Patterson’s job since he took over for the injured Chad Kelly with three games left last season. The former five-star recruit is equipped with a quick release, advanced accuracy and the ability to salvage broken plays with his legs. With another deep receiving corps to throw to, Patterson could be poised to put up big numbers this season given he stays healthy.

Back after an academic credits snafu cost him all of last season, Wilkins will get the first chance in his career to be the Rebels’ featured back. The senior has never gotten more than 73 carries in a season but recently said he’s preparing himself for a significantly larger workload. At 6-foot-1 and 217 pounds, he’s got the frame to handle it.

No. 2: D’Vaughn Pennamon or Eric Swinney

Knox, a sophomore walk-on, has received rave reviews from coaches for his ability to do a little bit of everything at a position where the Rebels are trying to replace an All-American in Evan Engram, but he may have to wait later than expected to start trying to fill that role. The 6-4, 250-pounder suffered a foot injury toward the end of camp that the team is still evaluating and may sideline him for the season opener.

No. 2: Ty Quick or Jason Pellerin

Metcalf and Brown will make up one of the SEC’s bigger-bodied receiving tandems on the outside. The biggest receiver on the roster, the 6-4, 220-pound Metcalf caught two touchdowns before a broken foot ended his freshman season after two games and is an ideal red-zone target. Brown, at 6-1 and 225 pounds, uses his frame to create space and is hard to tackle if he breaks free. The duo will be a handful for smaller defensive backs given they stay healthy.

The most experienced receiver on the roster despite his youth, Jefferson burst onto the scene last season a freshman, finishing second on the team in catches and third in receiving yards. The son of Miami Dolphins receivers coach Shawn Jefferson has received praise as the best route-runner on the team. He was limited in camp some as a precaution after having his knee scoped in the offseason, but Jefferson returned to practice recently and should be ready for the opener. Brown, Markell Pack and Tre Nixon are also options here depending on the formation.

Little, a former five-star signee, is set to begin his first season as a full-time starter after starting five games last season as a true freshman, but senior Rod Taylor will likely get some reps here, too, with interim coach Matt Luke recently saying as many as nine linemen could be in the rotation this fall.

No. 2: Royce Newman or Rod Taylor

Patterson has cemented himself as one of the SEC’s top interior linemen heading into his junior season. The 6-3, 314-pound Patterson has started 18 games in his career and could even slide inside to center if needed after getting three starts there a season ago.

Originally recruited as a center, Rawlings began his Ole Miss career at right tackle before moving back to his more natural position at the end of last season. The fourth-year junior has started 15 career games.

Bouldin gets the nod here for now with Jordan Sims battling a sprained ankle that kept him out of practice in the latter part of training camp, but both are going to play. Sims (15 career starts) has the experience while Bouldin, a senior, made a push for the most significant playing time of his career with a strong camp.

Givens started five games as a redshirt freshman last season and has maintained his starting spot, though coaches have also gotten a look at the 6-foot-6, 304-pounder at guard in camp. Rod Taylor is also an option here.

Haynes, a first-team preseason All-SEC selection, is back for his senior season as one of the league’s top pass rushers. Sheppard has established himself at the other end spot with a strong camp heading into his first season of eligibility with the Rebels after transferring from Syracuse.

Another position that could be interchangeable, Coatney spent the majority of camp working with the first team ahead of Breeland Speaks. Coatney redshirted last season while recovering from a torn ACL he suffered in junior college but is healthy and has shown quickness and physicality inside. Speaks, who’s made nine starts the last two seasons, also spent some time with the first team in camp and will rotate here.

Jones, the former five-star recruit, started four games last season as a true freshman and is already making a case as one of the Rebels’ best interior lineman with a unique combination of size and quickness. He suffered a scare during camp when he took a hit to the back that hospitalized him for a night, but the 6-2, 315-pounder has returned to practice and should be good to go for the opener. Coatney could also fill in here.

No. 2: Josiah Coatney or Ross Donelly

Gates is by far the Rebels’ most established playmaker on the second level of the defense, leading the Rebels in tackles the last two seasons.

No. 2: Jarrion Street or Willie Hibbler

Evans will get the start here in the opener with Detric Bing-Dukes suspended one game following his recent shoplifting arrest, but this position will be worth watching. Bing-Dukes (10 games, three starts last season) has the edge in experience, but Evans, a redshirt freshman, has impressed with a strong camp and could keep the job even when Bing-Dukes returns. Either way, both will get their fair share of snaps.

Moore will take over at the new position in first-year coordinator Wesley McGriff’s defense, a position similar to the Huskie in former coordinator Dave Wommack’s 4-2-5 scheme.

No. 2: Breon Dixon or Cam Ordway

Hartsfield made the move from safety in the spring and, at 5-11 and 200 pounds, gives the Rebels a physical presence on the outside. Julius missed most of the spring with a fractured arm but is healthy again after starting eight games last season as a redshirt freshman. Ken Webster, who’s returning from reconstructive knee surgery, is also back here after spending part of training camp at safety.

One of the leaders on the back end of the defense, Woods is looking to build on an impressive sophomore season in which he tied for the team lead in interceptions (3) and passes defensed (6) and finished second in tackles (63).

No. 2: Deontay Anderson or Jaylon Jones

Moore, who missed all of last season with a torn pectoral muscle, appears to have pulled ahead of senior C.J. Hampton at this spot, but that doesn’t mean things are settled as coaches continue to look for the next-best safety behind Woods. Jaylon Jones has moved from cornerback to safety to give the Rebels another option and took second-team reps there toward the end of camp.