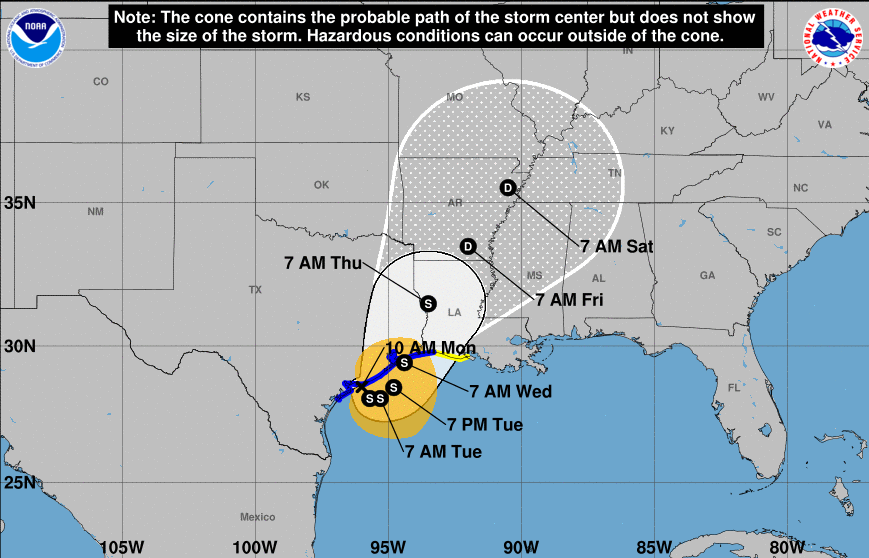 The latest Harvey path 2017 update shows that Louisiana, Arkansas and Mississippi are in the storm's track through this coming weekend. (National Hurricane Center)

What began as Hurricane Harvey 2017 is now Tropical Storm Harvey 2017 and it is still creating dangerous havoc in its path.

Now, it appears Harvey will linger for days in Texas with devastating additional flooding before slowly tracking into Louisiana and Arkansas with heavy rains across Mississippi through this weekend.

The latest Harvey path updates reveal that this massive, messy storm is not going away any time soon with more widespread flooding to come.

Bands of heavy rain from Harvey lashed southwest Louisiana on Monday, ratcheting up fears of destructive flooding in some storm-weary communities.

Floodwaters covered roads and crept toward homes in Brenda Bradley’s neighborhood in Moss Bluff, a Lake Charles suburb in Calcasieu Parish. Bradley, 72, and her husband, Jimmie, had stacked sandbags at their doors. The rising water was lapping at the steps to their back porch Monday morning.

Louisiana Gov. John Bel Edwards requested the declaration in a letter to the White House on Sunday.

“Significant lifesaving efforts such as search and rescue, transportation to shelters, logistical support, and shelter operations will be particularly needed in parts of southwest Louisiana and can be supported by the federal government with an emergency declaration,” the governor wrote.

In New Orleans, residents arrived at fire stations across the city Monday to get sandbags for their homes as outer bands of heavy rain from Harvey began heading east from Houston.

The city’s pump and drainage system is still not working at full capacity, and emotions are running high for many, especially those whose homes flooded during Hurricane Katrina in 2005.

“It really evoked a lot of emotions and heartbreak for the people who are going through that now in Houston,” said Ray Gratia, who picked up sandbags for his New Orleans home, which flooded during Katrina.

Harvey, the most fearsome hurricane to hit the U.S. in more than a decade, came ashore late Friday about 30 miles (48 kilometers) northeast of Corpus Christi, Texas, as a Category 4 storm. The slow-moving storm has caused catastrophic flooding in Texas.

Louisiana also is assisting Texas, sending teams of 30 wildlife and fisheries agents with 30 boats to join search-and-rescue efforts across state lines. The caravan of Louisiana agents was on its way to the Houston area on Monday morning after spending the night in Beaumont, Texas.

Tornado and flash flood watches covered parts of southwest Louisiana as Harvey dropped torrential rains on that part of the state.

An emergency response official in coastal Cameron Parish said the threat of flooding from Harvey’s torrential rains could be “new ground for us.” Danny Lavergne, director of Cameron Parish’s Office of Homeland Security and Emergency Preparedness, said approximately 30 roads in the parish were covered with water but remained passable on Monday morning. Elevated homes didn’t appear to be at risk of flooding Monday, according to Lavergne.

But he added it was “early in the game,” with more heavy rain in the forecast.

Cameron Parish has roughly 6,800 residents living in the coastal community, which was devastated by storm surge from Hurricane Rita in 2005 and Hurricane Ike in 2008. This time, Lavergne says the greatest threat is the sheer volume of rainwater.

“We don’t know how fast we can drain this (water) off. It’s new ground for us,” he said.

Kent Kuyper, a Nation Weather Service meteorologist in Lake Charles, said about 5 to 10 inches (25 to 38 centimeters) of rain were expected to fall Monday in southwest Louisiana.

Bradley’s Moss Bluff home hasn’t flooded since 2006, when seven inches of water damaged the two-story house. But she has had other close calls: Flooding from a storm in May damaged her 86-year-old next-door neighbor’s home.

“Now she’s out of her home again and praying it doesn’t flood again,” Bradley said.

Gratia said his New Orleans home only got about a foot of water during Katrina, but the bigger problem was mold. He said it was weeks before the city allowed residents to return and by then mold had consumed the entire first floor of his two-story house.

Having been through Katrina, Gratia has some advice for Texas flood victims.

“First of all, I hope they have flood insurance, because that’s a critical factor, but document everything you can to document your loss,” he said. “Take photos. Get in there as quickly as you can and air out the place. It will help with the mold situation or avoid mold.”