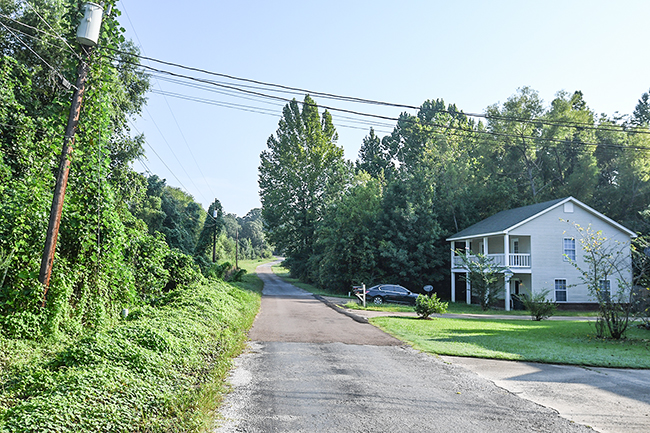 An affordable housing development is planned for the end of Cannon Road, located off of Highway 6 east of Highway 334, in Oxford, Miss. on Tuesday, August 22, 2017.

One of the two proposed affordable housing neighborhoods being built by a public and private partnership announced by the city of Oxford on Monday will be named after Belle River, an African- American woman who lived in Lafayette County in the late 1800s.

LOU-Home, a private housing advocacy nonprofit group partnered with local developer Stewart Rutledge to obtain $15 million in competitive funding to construct 96 new homes, which will be leased to the area’s workforce community.

The homes will be largely concentrated in two neighborhoods. The Belle Rivers development will be located on 20 acres just east of the now-empty Riverside Place Apartments. The other development, dubbed Eastover, will be nearby, located north of the Brittany Woods subdivision on 60 acres of land.

The developments will be a mix of townhouses, duplexes and detached single-family homes.

LOU-Home’s Chief Administrator Officer Fred Laurenzo said talks with Rutledge began about a year ago about partnering and applying for the tax credits from MS Home Corp. together.

“The rules for the program previously made it difficult for projects to compete with other locations,” Laurenzo said Monday.

“But then the rules changed and Stewart contacted me and said we may just have a chance now.”

Laurenzo and Rutledge were both awarded $750,000 in tax credits for 10 years.

Rutledge said other than the two main developments, there will be several scattered “blighted” structures redeveloped and revitalized to provide additional workforce housing scattered throughout Oxford and Lafayette County.

Final engineering and pre-development activities are expected to occur over the next six months followed by a 12-to18-construction period.

All units would be reserved for people who earn at or below 60 percent of the area median income. Further, all homes would be offered to the public as “lease to own” with the developers committing to counting every dollar paid toward the lease as an eventual down payment toward the home.

According to Data USA, the median income for Lafayette County is about $44K, which should make lease payments about $600 a month on average.

“What these developments will do is allow people who work in Oxford, to live in Oxford,” Rutledge said. “This is an amazing opportunity that’s extraordinarily rare.”

Rutledge said once the construction process has begun, he and Lou-Home will begin announcing the application process.

“We will have a very strict application and will check criminal backgrounds, renting history and credit background,” he said.