Donations for Harvey victims being collected at several Oxford locations 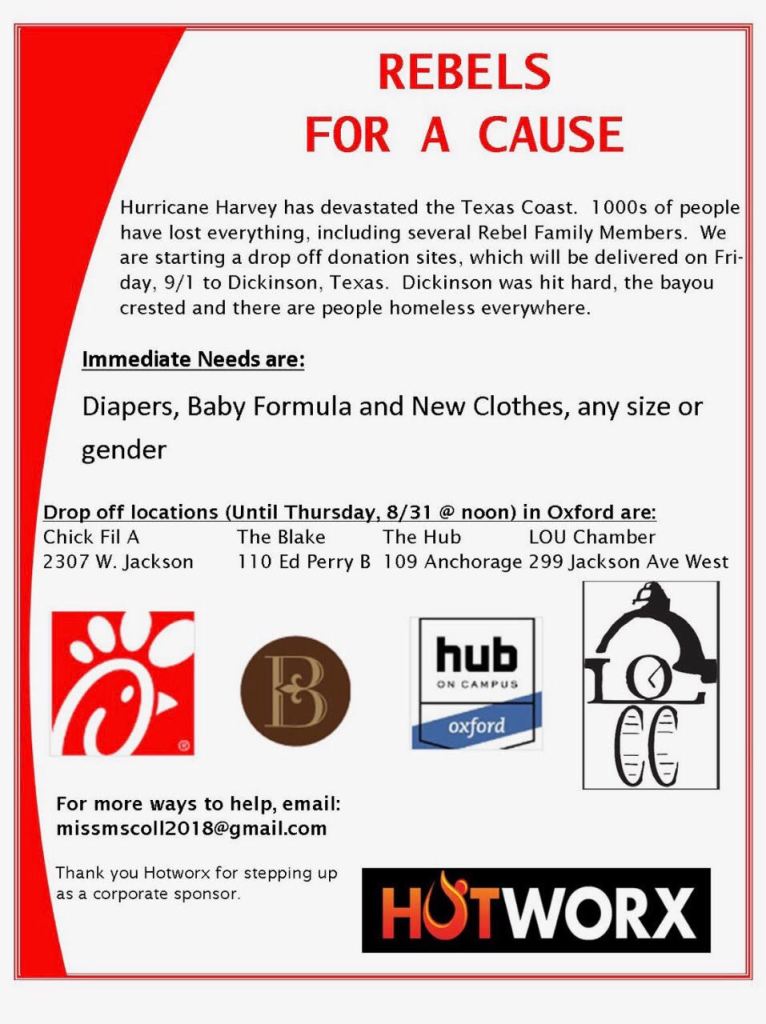 Before her family made Oxford their home nine years ago, Andrea Hightower spent much of her childhood playing on the streets of Dickinson, Texas.

Today, many of those streets are now underwater after Hurricane Harvey slammed into the Texas coast Friday.

“I started receiving texts, phone calls and photos from family and friends asking for help,” Hightower told the EAGLE Monday. “I knew I had to do something.”

Hightower started making her own phone calls and by Sunday, had plans in place to start collecting items for those affected by the storm.

“We are collecting clothing, baby diapers, formula and whatever people wish to donate,” she said.

Collection sites have been set up at The Hub apartments, Chick-fil-A, the Oxford-Lafayette Chamber of Commerce and The Blake. Donations of items will be accepted through noon on Thursday.

“We will drive the items down to Dickinson on Friday,” Hightower said.

Cash donations are also being accepted to help by for renting the U-Haul, she said, which costs about $500.

“Anything over that will be spent buying clothing, shoes and other items to bring there,” she said.

The formula should the pre-made kind since many people don’t have clean water, Hightower said.

Food, if donated should be nonperishable and able to be eaten without needing to be cooked since many don’t have electricity – or homes.

“They won’t have anywhere to cook it,” she said. “The Red Cross and other organizations are giving out food so we really want our focus to be on clothing, formula and diapers. We’re also asking for small bags of dog and cat food, but we will take whatever anyone feels they wish to donate.”

Hotworks, where Hightower works as an assistant manager, is the corporate sponsor for the fundraiser. Collections are also being accepted at Hotworks headquarters in New Orleans. Hightower said those supplies will be collected on Friday on her way to Dickinson where the items will be delivered to shelters set up in the town.

“We could also use some volunteers to help Thursday afternoon at The Hub to help us load up the truck,” Hightower said, who is the reigning Miss Mississippi Collegiate America and former Miss Mississippi Teen USA.

For more information or to make a cash donation, contact Hightower at adhightower5@gmail.com.