Ole Miss coordinators Phil Longo, Wesley McGriff have autonomy to ‘do their jobs’ 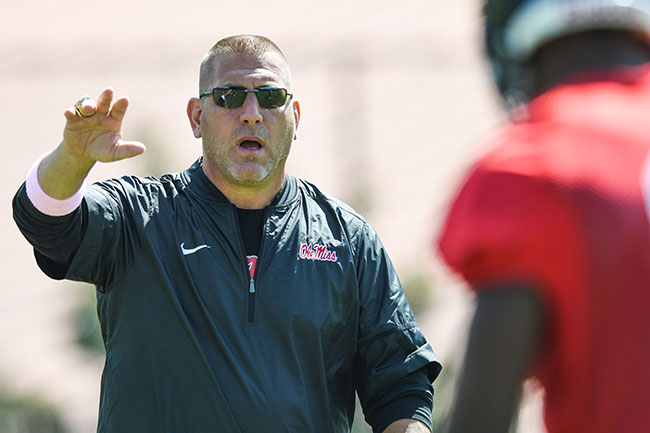 While Luke has roughly four months to make his case for the permanent job, Longo and McGriff will also be trying to prove themselves to a degree. Longo’s offenses have put up big numbers everywhere he’s been, including the last three seasons at Sam Houston State, but he’s never called plays at the Football Bowl Subdivision level. Neither has McGriff, whose only other stint as a defensive coordinator came at Kentucky State in the late 1990s.

With Longo, the popular belief was that he and former head coach Hugh Freeze would work together to develop schemes and call plays given Freeze’s offensive background, but Longo said Freeze gave him complete control from the start. That’s carried over with Luke.

“Throughout the spring, that’s the way it was,” Longo said. “It really hasn’t been a change from the spring to the summer, and I fully appreciate the fact Coach Luke has let us run with what we’re doing.”

What Longo is doing is running his version of the air-raid system at warp speed while trying to inject more balance into an offense that finished 12th in the Southeastern Conference in rushing last season. Sam Houston State averaged more than 76 plays a game last season, but Longo isn’t against slowing things down if necessary.

“If Coach McGriff or any defensive coordinator I’ve ever worked with, if they saw something in a game they didn’t expect and needed time to coach it up or make adjustments on the sideline, I would slow it down in the middle of the second quarter if it meant helping our defense get prepared for the next drive,” Longo said.

McGriff is tasked with turning around a defense that bottomed out last season, finishing 120th in run defense, 111th in total defense, 100th in scoring defense and 97th in sacks. Players have taken to the simplicity of McGriff’s system, which has far less plays and concepts than what the Rebels ran under former coordinator Dave Wommack.

“It can’t be a lot of schemes or we’ll be thinking too much,” cornerback Myles Hartsfield said. “He wants us to play fast, play physical and attack.” 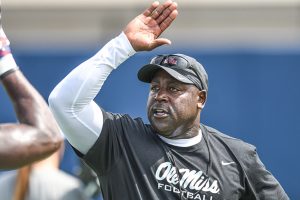 McGriff said he’s confident in the depth and ability along the defensive line heading into Ole Miss’ opener against South Alabama on Saturday (6:30 p.m., ESPNU), but linebacker and safety continue to be the biggest concerns. It’s part of the reason he has decided to have each of his position coaches on the sideline during games with graduate assistant Zach Brown set to be the lone set of eyes watching opposing offenses from the press box.

All of the offensive assistants other than tight end coach Maurice Harris will also coach from the field.

“I think going into a game, I think those (players) need to be able to look at their position coach in their eyes and the position coach needs to coach them during competition,” McGriff said. “I think that’s the best way we can get that adjustment done.

“I think it’s just too important on gameday not to have those guys with their position coach if you can still get the information from up top, and I think right now we’re structured to do that.”

Luke is all for whatever his coordinators think is best.

“I will certainly interject if I feel like I can help in any way, but I’m going to let those guys do their jobs,” Luke said.