Storm center to roll over Oxford by sunset today 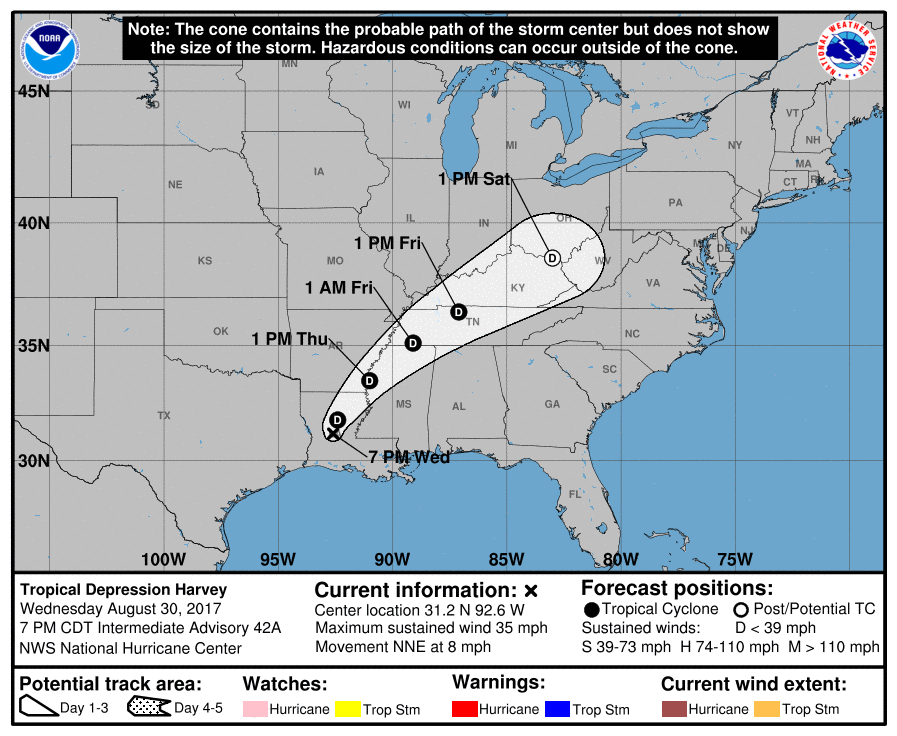 Despite the once-category 4 Hurricane Harvey weakening as it travels over land to a tropical depression, the storm is still expected to drop several inches of rain over north Mississippi over the next 48 hours.

According to the NWS latest update, there’s a 100-percent chance of heavy rain today and an 80 percent of rain tonight; however, it tapers down to 30 percent by Friday morning as the storm continues on its northeast path. Projected rainfall total for Lafayette County is 4 to 6 inches by Friday afternoon.

Depending on the exact path the storm travels, rain amounts for north Mississippi can vary. Creeks and rivers could rise above flood stage. Winds are expected to pick up to 20 to 30 mph on Friday with the possibility of stronger gusts.

NWS meteorologists say there is a chance of isolated tornadoes Thursday.

Earlier Wednesday, a tornado touched down in Petal. Meteorologist Alek Krautmann says damage was reported in Pearl River County, in the city of Biloxi and in a subdivision between Ocean Springs and Gautier and also caused flash flooding before dawn Wednesday in parts of Pascagoula.

According to the NWS, the center of the storm should be over Oxford today around sunset.

Tannehill said while Oxford could experience some flooding, her thoughts and prayers are with Texas and Louisiana.

“In light of all they are dealing with, we will certainly not complain about rain,” she said Wednesday.

The rain is expected to be gone by Friday evening. The forecast for Saturday – when Ole Miss will play its season opener against Southern Alabama – is mostly sunny with a high of 82 degrees.

“The Grove will certainly be wet on Saturday but I don’t believe that will dampen the spirits of Ole Miss fans and Oxford residents cheering on Coach Matt Luke in his first game as head coach,” Tannehill said.

“There are two roads around College Hill and Old Sardis Road areas that we generally have a problem with flooding during a heavy rain event so we will keep a close eye on them,” he said. “But generally, Lafayette County doesn’t have real flooding issues. Twenty-five years ago, the Yocona River had some issues that would cause it overflow and cause flooding but those issues have been fixed.”

Quarles said there’s little that the county can do to prepare for whatever the storm may bring.

“We just have to keep a close eye on it,” he said.