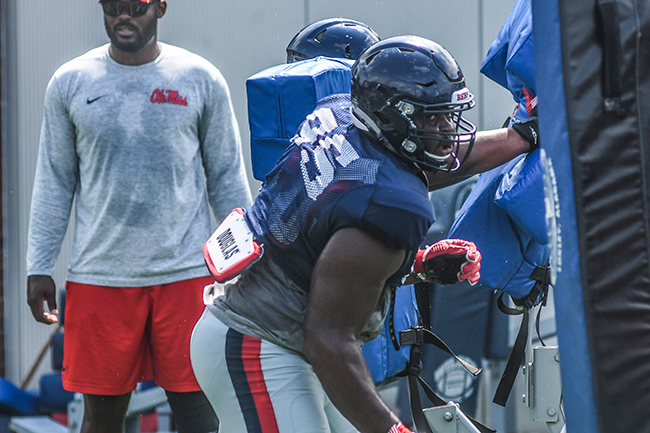 Ole Miss’ nose tackle made a tackle during the Rebels’ scrimmage Aug. 12 and felt pain on the right side of his body. It then traveled to his neck.

“I really don’t know about the other parts of my body, but it scared me for a little while,” Jones said.

Jones was taken to Baptist Memorial Hospital-North Mississippi to have precautionary X-rays done on his spine and was kept overnight for further tests, which came back negative. Jones was released from the hospital the next day with a clean bill of health and has slowly worked his way back into the fold.

A few practices passed before Jones returned to the field, though he didn’t participate in many contact drills. His first full-contact practice since returning came Tuesday, putting the 6-foot-2, 315-pounder on track for Saturday’s season opener against South Alabama.

“I’m back feeling good,” Jones said. “First practice today with contact. I ain’t feel any pain. I didn’t get many reps, but I just wanted to get back in the groove.”

Jones spent all of training camp running with the first-team defense before his injury after starting four games and recording 39 tackles and 4.5 tackles for loss last season as a true freshman. Breeland Speaks moved over from defensive tackle to fill in at the position in Jones’ absence with Josiah Coatney emerging at tackle.

They’re the Rebels’ top three options on the interior of a defensive line that’s looking to rebound from a subpar 2016 in which Ole Miss finished 120th nationally against the run. Ross Donelly, Austrian Robinson and converted defensive end Charles Wiley, who moved inside late during camp, are among others that Jones believes have made strides to help the Rebels be more stout up front.

“I really think we’re an outstanding defensive line up front this year,” Jones said. “(Defensive line) coach (Freddie) Roach puts us in a good scheme to be really great up front.”

But Jones said his injury scare won’t affect his motor when he’s on the field.

“This is something I love to do,” Jones said. “I give it my all every time I be on the field.”

Said interim coach Matt Luke, “I think he’s going to be fine. Just got to get that confidence back.”