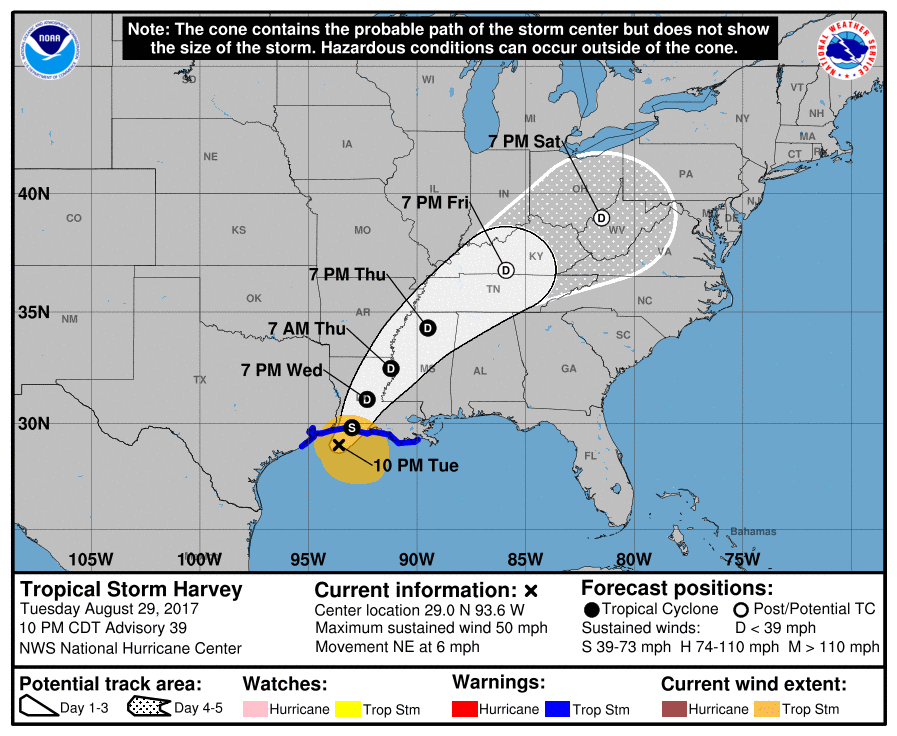 From the National Weather Service

A flash flood watch has been issued by the National Weather Service for Lafayette County in anticipation of Tropical Storm Harvey making its way into north Mississippi today.

The flood watch begins at noon today and goes through 7 p.m. on Friday.

Three to five inches of rain are expected with some gusty winds and a chance of severe thunderstorms today through Friday.

According to the NWS as of 11 p.m. Tuesday, chances for heavy rain are at 70 percent for today, 90 percent on Thursday and 80 percent on Friday. The heaviest rain – 2 to 3 inches – is forecasted to occur on Thursday night.

Oxford Emergency Management Coordinator Jimmy Allgood said he and other local emergency response agencies will have a video conference call this morning with the NWS Memphis Office.

“We will get a detailed forecast for the event,” Allgood said. “This forecast is dependent on several factors, such as how much will the storm strengthen now that it is back over gulf waters, and will it speed up or slow down as the storm begins moving inland again.”

Allgood said residents should keep an eye on the weather and make sure their disaster preparedness kits are in order.

“I expect and hope that this will only be a heavy rainfall event,” he said. “But we should all be prepared in case the prediction is off.”

Allgood said Oxford could expect some localized flash flooding of streets and roads.

Other than being prepared, residents may be able to prevent some streets from flooding, according to Oxford Assistant Engineer Reanna Mayoral.

“We ask that citizens be aware of where they are placing any sticks, leaves and yard clippings and avoid placing them in the street or near any open drains, especially before a storm,” Mayoral said. “A large part of our localized flooding issues are from pipes that have gotten clogged with leaves or yard clippings.

“When it rains, they are washed along the curb and gutter and then accumulate at the storm drain.  The open top surface drains are particularly susceptible to this problem.”

The city’s street department has been checking storm drains around the city, particularly in areas that have been prone to flooding in the past.

“They routinely inspect the drains before any big rain event,” Mayoral said. “Environmental Services also tries to perform extra checks in the problems areas before a storm and that has been a great help.”

Saturday’s weather is forecasted to be partly sunny with only a 20 percent chance of showers, which is good news for those attending the University of Mississippi Rebels first home game against the South Alabama Jaguars at 6:30 p.m. at the Vaught-Hemingway Stadium. However, due to the heavy rainfall in the days prior to Saturday, tailgaters should be prepared for an extremely muddy Grove.

The Mississippi Highway Patrol is urging motorist traveling in heavy rain to use caution.

Motorists planning to travel during the holiday weekend are urged to lower speeds when weather conditions are encountered. Wiper blades should be inspected in regards to driving visibility along with proper tire tread depth to prevent hydroplaning.

Due to the anticipation of heavy traffic and inclement weather associated with Tropical Storm Harvey, state troopers will place emphasis on saturation patrols to combat speeding and reckless driving throughout the Labor Day weekend. The 2017 Labor Day Travel Enforcement Period will end Monday at midnight.

MHP investigated 170 crashes including one fatality during the 2016 Labor Day enforcement period.

Additional safety checkpoints will be established to promote seatbelt usage and remove impaired drivers from the roadways.