Quantity, quality have Ole Miss confident in next wave of receivers 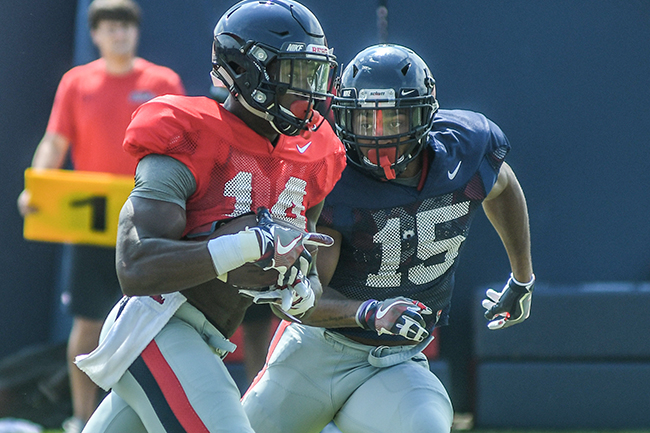 It’s hard for Shea Patterson to single out his go-to receivers.

It’s not for a lack of quality among Ole Miss’ wideouts. It’s the quantity that’s creating the kind of problem any quarterback would love to have.

“We have so many of them,” Patterson said. “I can say I think we have the best receiving corps in the country.”

Even with the loss of Quincy Adeboyejo, Damore’ea Stringfellow and All-American tight end Evan Engram — all of whom are in the NFL — the depth and talent the Rebels have stockpiled out wide in recent years doesn’t have them worried about replacing that production for a passing game that’s been tops in the Southeastern Conference each of the last two seasons.

Of the 10 scholarship receivers on the roster, all but two were rated as four-star prospects by multiple recruiting services while one, junior DaMarkus Lodge, was ranked as a five-star recruit by Scout.com. It’s not the most seasoned collection of pass-catchers with sophomore Van Jefferson the only one with more than one career start, but with size, speed and a mixture of both at different spots, first-year receivers coach Jacob Peeler believes the group has the physical ability to make up for it.

“There’s not a day that I don’t walk off the field and just be amazed I get to coach these guys,” Peeler said. “They’re very talented. They’re still young. There’s some things we’ve got to work on, some fundamental stuff, but you look from Practice 1 of spring until today, it’s huge strides those guys have made and it’s a testament to their work ethic.”

A.J. Brown and DK Metcalf are the headliners with their physicality on the outside. The 6-foot-1, 225-pound Brown averaged 14.2 yards on the 29 receptions he made last season as a true freshman while Metcalf’s only two catches last season went for jump-ball touchdowns before a broken foot ended his freshman season after two games, but the former Oxford High standout, who’s pushing 6-4 and 225 pounds, won’t just be a red-zone weapon this season, Peeler said.

“The guy that has probably progressed the furthest from spring ball to now has probably been him,” Peeler said of Metcalf. “The things that he’s doing now with his footwork and his hands, he wasn’t as comfortable doing. Now he’s just a mismatch wherever you put him on the field.”

Lodge has also emerged at the outside receiver spot to where he could start Saturday’s opener against South Alabama, but the parts are interchangeable. Brown got some work in the slot during training camp while Jefferson, who started all 12 games inside last season, moved outside at times in an effort to create advantageous matchups.

Depending on the formation, all of them could be on the field at the same time.

Redshirt freshman Tre Nixon, the fastest of the bunch, has moved outside to give the 6-1, 172-pounder a better matchup against smaller corners. Markell Pack and Trey Bledsoe will also be part of the rotation while true freshmen Braylon Sanders and Kam White impressed in the preseason to the point that both are likely to eventually see the field.

Peeler said he’ll play as many receivers as it takes to give Ole Miss the best chance to win any given Saturday. He’s got plenty of options.

Peeler has seen this kind of collective talent before at California, where he spent two seasons coaching the same position before being hired at Ole Miss in January. Peeler helped tutor six pass-catchers on the Bears’ 2015 team that are still on NFL rosters.

There’s still plenty left to prove for Ole Miss’ wideouts, but the potential is there.

“I would say this kind of compares to that year,” Peeler said. “I have not seen them play in a game yet and I’m not ready to throw a tag on them yet, but in terms of work ethic and all of that, I’d say it’s very comparable to that season.”