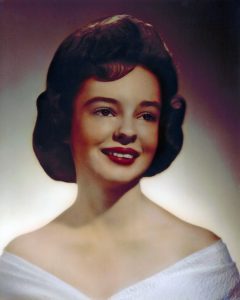 Funeral services were held Monday, August 28, 2017, at Saulsbury Baptist Church in Saulsbury, TN, with Justin Murff officiating. Interment followed in Saulsbury Cemetery. Shackelford Funeral Directors of Bolivar were in charge of the services.

A native of Oxford, Mississippi, she was the daughter of the late Venn H. and Marine Winter Morrow. She was a 1964 graduate of Kingsbury High School, where she was a member of the National Honor Society. She also attended Memphis State University. A homemaker and a 10-year caregiver for her parents before their passing, she lived most of her life in Memphis before moving to Olive Branch, MS in 1996.

On September 11, 1965, she was united in marriage to Mr. John T. Covey. Mrs. Covey was Baptist in belief, and in her spare time, she enjoyed reading, word puzzles and animals, especially her cats.

She is survived by her husband, John T. Covey of Olive Branch, MS; her daughter, Cindi Cannon and husband William of Memphis; one step-grandchild; and four step-great-grandchildren.

Memorials may be sent to the Memphis Union Mission (http://www.memphisunionmission.org) or the Mid-South Food Bank (http://www.midsouthfoodbank.org)