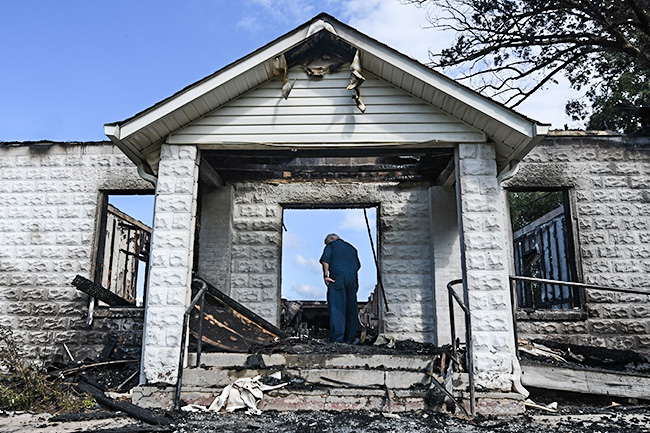 Martha May has spent every Wednesday evening cooking for her Yellow Leaf Baptist Church family for the last 21 years.

“We served the first meal in 1996 in that building,” she said Friday morning. “Now it’s gone.”

A fire destroyed the fellowship hall and what was once the main church sanctuary Thursday night.

The older church building that was destroyed in the fire served as a Sunday school for adults and children and the where the children’s Ministry was held each Wednesday night.

“God is in control of this,” said May, who is the church clerk. “He’s got this. It happened for a reason we may never know, but we will come out stronger.”

Pastor Shane McGivney said Friday he left the church Thursday night around 9:15 p.m. and all was well. Winds and rain had picked up as a band from Tropical Storm Harvey moved into the area.

“About an hour and a half later, our youth pastor went back to the church because he forgot something and found it completely engulfed,” McGivney said.

The current church sanctuary was not damaged in the fire, he said.

“We had such an amazing response from the firefighters,” he said. “We had about eight fire trucks here. They came from all over the county.”

About 38 volunteer firefighters responded to the church to help put out the blaze as they battled high winds and heavy rain as well. The remained on scene until 12:10 a.m. Friday.

Oxford Fire Department also responded with its ladder truck to reach the top of the building.

McGivney said the fire started from a tree that fell onto electrical lines, which sparked and caught the roof of the old church on fire and from there, the fire spread quickly.

The State Fire Marshal’s Office was on the scene early Friday morning. A representative said the fire was still under investigation; however, it was likely weather-related and the fire was not suspicious.

The church is located on County Road 435 off Highway 334 near Camp Lake Stephens.

Word about the fire spread quickly over social media and area churches, members and non-members started to arrive, offering to help in whatever way they can. A local company offered to help take down the remains of the church.

“We’ve received a lot of phone calls,” McGivney said. “The support and concern show to us has been overwhelming.”

McGivney said the church will rebuild the fellowship call eventually.

“I dare say something newer and more up-to-date will be built that will meet our needs even better so we have more opportunities to minister to the people of Lafayette County and to love people.”

Chairman of Deacons Randy McCluskey was at the church for most of the morning Friday.

McCluskey said the children’s services will be moved into the new church for now.

While the buildings were destroyed, the cornerstone that marks the date the church was established in 1853 was still standing.

“We’re probably going to be able to salvage it,” he said. “Other than that, I don’t know what if anything else is salvageable.”