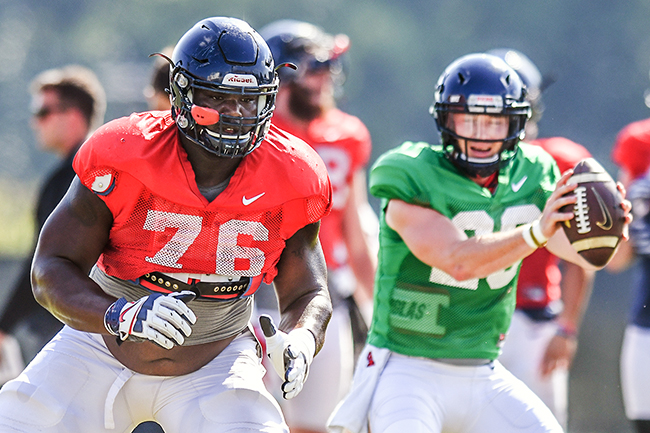 Daronte Bouldin is in the position he always thought was possible.

Bouldin is embarking on his fifth season in Ole Miss’ football program, most of them spent as a reserve offensive lineman. But he’s in line to start at right guard — it would be the first opening-game start of his career — when Ole Miss opens its season Saturday against South Alabama at Vaught-Hemingway Stadium.

“It means a lot,” Bouldin said. “I felt like I always had the ability and stuff to do it, but I had to just wait my turn.”

Bouldin is one of the last remaining members of Ole Miss’ star-studded 2013 signing class, though he wasn’t one of the headliners. A three-star prospect coming out of Canton High, Bouldin redshirted his first year on campus before filling in wherever he was needed.

He played nine games at tackle in 2014 before moving inside the following season, playing in every game as a backup guard. Bouldin stayed there last season and backed up Jordan Sims and Javon Patterson, but injuries resulted in Bouldin making the first four starts of his career.

At 6-foot-5 and 318 pounds, physicality isn’t the issue for Bouldin. It’s the consistency and focus Bouldin has had to hone through the years that’s finally helped him get to this position on the depth chart.

“(Interim) coach (Matt) Luke focuses on a lot of mental toughness in fall camp, and I felt like that was my biggest problem,” Bouldin said. “I could be a good player for three or four plays then I kind of got tired. I’m just focusing on my mental toughness. Coach Luke is big on staying focused on that. I think that kind of gave me an edge.”

Sims, who’s started 15 games the past two seasons, has been slowed by a nagging ankle sprain and will be a gametime decision Saturday, Luke said, but the two competed for the starting job throughout training camp and are likely to rotate when Sims is healthy. Luke said consistency is still a work in progress for Bouldin, but it’s better than it was.

“He shows flashes of being really, really good all the time,” Luke said.

If Bouldin ends up getting the nod Saturday, it’ll come against a formidable opponent in South Alabama, which finished in the top 60 nationally in total defense and scoring defense last season. Bouldin said he’s been impressed by what he’s seen from the Jaguars’ defensive line in particular on tape.

“Just a lot of high-effort guys that can play if you lag off on a play,” Bouldin said. “They can do some pretty good things if you take plays off.”

For Bouldin, it will be a fitting gauge of just how far his game has come.

“Consistency is my main thing,” he said.