For Shea Patterson, time is now to emerge as face of Ole Miss’ program 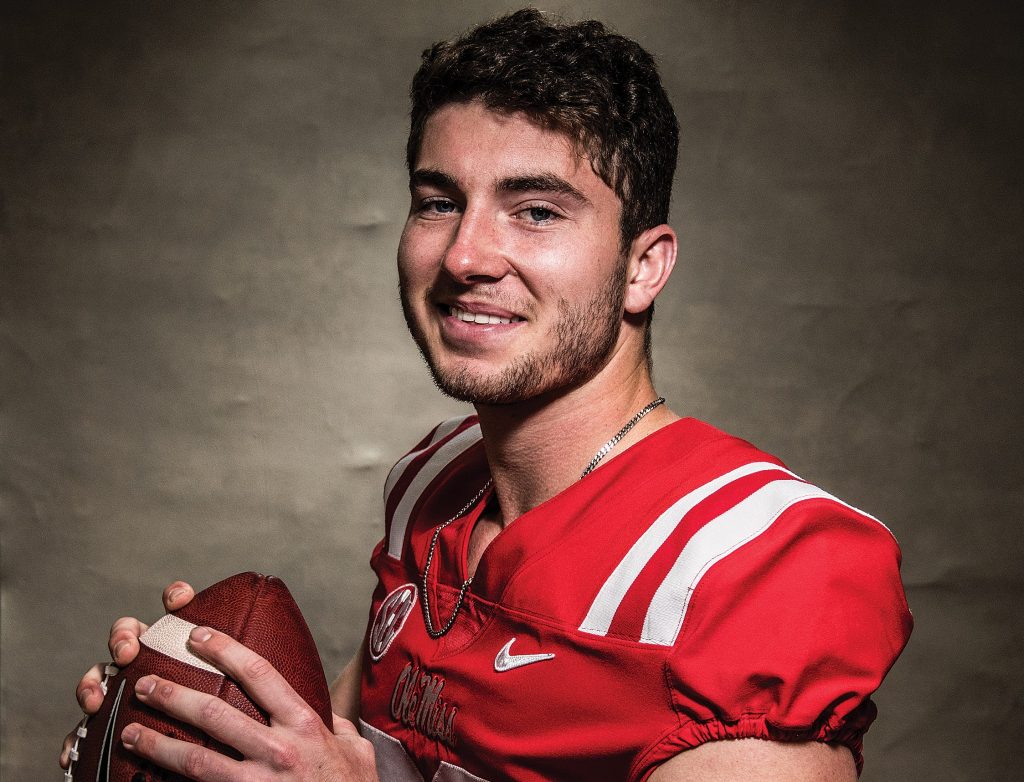 Ole Miss quarterback Shea Patterson is taking on more of a leadership role to go with his physical talent. (Bruce Newman)

This article was originally published in Football 2017.

The change became noticeable during the spring.

That’s when former Ole Miss coach Hugh Freeze brought in a team of Navy SEALs one day as a bonding exercise for his team through overcoming adversity. Not a whole lot was easy about the experience for a group of football players, but when the going got tough, quarterback Shea Patterson got going, particularly with his words.

“I had to lead the charge for one event we were doing,” Patterson said. “I think I did a pretty good job, and guys kind of rallied around it. It really brought us together as a team.”

It was a step out of the comfort zone for the soft-spoken Patterson, who usually lets his play on the field do the talking for him. But it’s the kind of charge the Rebels expect Patterson to take more often as the sophomore quarterback works on becoming the face of a program stuck in turmoil.

That moment this spring served as a starting point.

“We had the Navy SEALS come in, and (Patterson) was part of a leadership thing where he had to get us going,” offensive lineman Javon Patterson said. “He did his job, and we really appreciate him and him coming along this far.”

Shea Patterson is further along than he expected to be at this point of his young career.

The former five-star prospect was recruited by major programs nationwide before his relationship with his older brother, Sean Jr., who’s on staff in an off-field role, and Freeze eventually put Ole Miss over the top in 2016. Yet Patterson kept a relatively low profile knowing he wasn’t going to play as a true freshman with Chad Kelly entrenched as the Rebels’ starter.

Until he had to.

Patterson was thrust into action when Kelly tore an ACL with three games left. He showed off the physical traits that made him one of the nation’s more sought-after recruits — the ultra-quick release, the accuracy, the escapability that drew comparisons to former Texas A&M quarterback Johnny Manziel — throwing for 880 yards and six touchdowns while adding 169 yards on the ground.

Patterson completed 54.5 percent of his passes, a number he’ll look to improve this fall, but teammates aren’t too worried about that. They’ve never questioned his talent. It’s the intangibles that they expect Patterson to make natural progress with as he prepares for his first season as the Rebels’ full-time starter behind center.

“I wouldn’t say he’s just a flat-out vocal guy,” defensive tackle Breeland Speaks said. “That’s definitely something that us as leaders are working on working with him about because as the quarterback, as the man and as the face of the program, you have to be vocal. That’s with anybody.”

Patterson has upped the ante with his actions, too. Teammates give accounts of how he’s often the first to arrive for workouts and practices and the last to leave, putting in long hours on the field and in the film room in an effort to build the offense’s chemistry.

“Things like that really show up to us,” Javon Patterson said.

Shea Patterson’s strides in that department were tested when the coach he grew the closest to during the recruiting process was suddenly gone. A thorough examination of Freeze’ university-issued cell phone records, sparked by an open records request made by former coach Houston Nutt’s attorney, Thomas Mars, as part of the civil lawsuit Nutt recently filed against the school, revealed calls made by Freeze to numbers linked to escort services that ended his five-year tenure with his resignation July 20.

Patterson, who will play for his second coach and second offensive coordinator this season, admitted Freeze’s abrupt departure was a lot for him to digest, but he didn’t let his teammates or his interim coach, Matt Luke, know it. His reaction in the team’s first meeting with Luke at the helm served as another indicator that Patterson is understanding his newfound role.

“He was one of the first ones to come up to me, and he said, ‘Coach, let’s go win some football games,” Luke said. “I think he’s excited about getting out there and playing. Put all the distractions behind him and just going out and playing football.”

Said Patterson, “I think that’s something I harped on this offseason. Obviously it helps when you’ve got guys like Javon, Marquis Haynes, Breeland Speaks, all those guys to help you out a little bit. But I think that’s a leadership role that you have to take as a quarterback in the SEC.”

The news added to the uncertainty of the NCAA’s investigation into the football program, which could result in more sanctions than what Ole Miss has already self-imposed for 21 alleged rules violations, including 15 Level I charges. Ole Miss, which will have its hearing with the Committee on Infractions on Sept. 11, has already cut 11 scholarships over four seasons starting with the 2015-16 academic year and banned itself from a bowl game for the upcoming season.

What’s been Patterson’s message to his teammates during these trying times?

Competing is what Shea Patterson is most comfortable doing. He’ll get a chance to do it this season in a new offense under coordinator Phil Longo, who brought his version of the Air Raid from Sam Houston State to Oxford in hopes of giving the Rebels more balance without sacrificing tempo.

“The offense that he has, we’re just so excited to put the ball down and show everybody what we’ve got,” Patterson said.

But Patterson is rounding it out as he emerges as the new face of Ole Miss’ program, one with a louder voice than usual that everybody is getting more comfortable gravitating toward.

“We look at him as our franchise quarterback,” Speaks said. “That’s how I feel Coach Freeze looked at him. He is our guy. We put all our faith in Shea.”