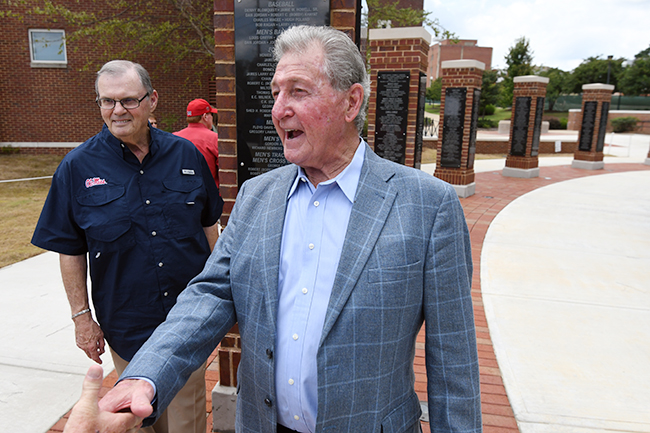 Former University of Mississippi player and coach Jake Gibbs, center, with Charles Farrill, left, greets a friend at the dedication of the Jake Gibbs Letterwinners Walk, outside of Vaught-Hemingway Stadium, in Oxford, Miss. on Friday, September 1, 2017. Gibbs was a two-sport All-American in baseball and football in the late 1950s to early 1960s. The walk recognizes athletes who have lettered at The University of Mississippi. (Bruce Newman, Oxford Eagle via AP)

The Jake Gibbs Letterwinners Walk, located outside of Vaught-Hemingway Stadium, was dedicated during a ceremony on Friday afternoon. The walk recognizes athletes who have lettered at The University of Mississippi.

Gibbs spoke of his collegiate, professional baseball, and coaching career during the hour-long ceremony.

Ole Miss’ motivation has to come from within amid…