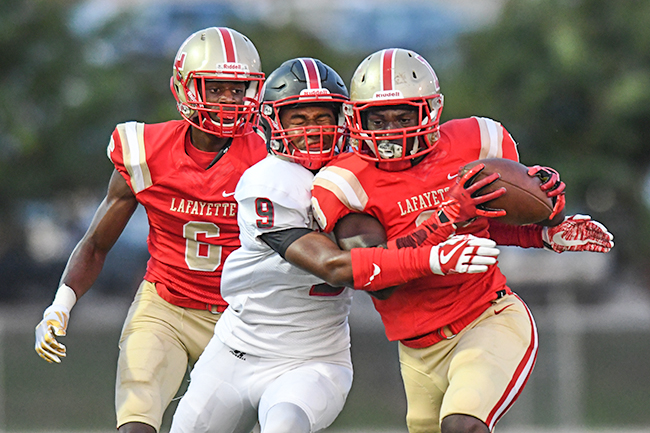 It was a tale of two halves for the Lafayette as they lost to undefeated North Panola Cougars 34-21 at William L. Buford Stadium on Friday night, leaving them still searching for their first win.

The Commodores (0-3) came out firing on cylinders in the first half and held a 21-16 lead as it came to a close, but the Cougars (3-0) held them scoreless in the second half.

The momentum of the game swung back and forth like a pendulum as the two teams turned the ball over a combined nine times, with an onside kick recovery and a punt returned for a touchdown by North Panola adding to the drama. It wasn’t until North Panola scored their third straight unanswered touchdown midway through the fourth quarter that the game started to seem out of reach for Lafayette.

“I thought we came out with a lot of intensity, our kids had a great week of practice and I think it showed in the first half, just a lot of fight in our guys, very proud of how we played,” Lafayette head coach Michael Fair said. “When adversity kind of hit in the second half we started making some of the same mistakes that we made that got us in this hole and we’re not ready to dig ourselves out when adversity hits. We’re working on it, I think that we’re closer now than we are last week.”

Lafayette didn’t have it’s usual big performance on the ground, but Jamie Shaw was able to muster up 41 yards and a touchdown, and Brandon Turnage scored on a 16-yard touchdown reception.

While the second half slump was certainly disappointing for the Commodores, sophomore quarterback Randy Anderson did show some improvement in the passing game. Anderson completed 8/13 passes for 58 yards and a touchdown and no interceptions, while also rushing for 13 yards and another score. Anderson originally moved to starting quarterback due to injury, but Fair said the coaching staff has been excited about what he brings to the table as a runner and a passer.

Next, the Commodores will attempt to break their losing streak against the Oxford Chargers in the Crosstown Classic.

“I’m going to be honest with you, we’re not playing Oxford this week, we’re playing us,” Fair said. That’s kind of the message to our guys, and we’re going to be the best team that we can be. I know we have a big game coming up, and we’re excited about that, but we have so many things to fix here in our field house before we can really worry about who our opponent is.

Fair said his players were ready to get back to work at practice after the tough loss.

“I think Oxford is going to see a better team than what we showed tonight,” Fair said. “We’re improving each week, it just takes time.”