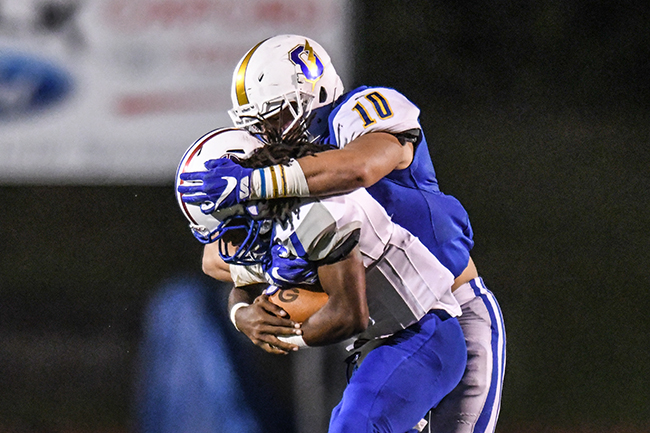 Oxford had the play ready last week but chose not to use it. On Friday night, head coach Chris Cutcliffe decided not to wait any longer.

On a 4th & 3, the Chargers called up J.J. Pegues number and ran a fake punt run that went for 27 yards late in the first half. It caught Grenada so off guard it allowed Pegues to strike two plays later for a 35-yard touchdown pass.

It was that kind of night for Oxford, who defeated Grenada 22-0 in their home opener at Bobby Holcomb Field to carry momentum into next week’s Crosstown Classic against rival Lafayette.

“We were going to run it against Starkville but we knew it wasn’t the right time,” Pegues said. “We knew versus Grenada that was our chance to run the play. I was just thinking ‘get the first down.'”

Between the bag of tricks and a defense that did not allow a point, Oxford (2-1) defeated Grenada for the second time in less than a year. The Chargers sent Grenada home with a first round loss in last year’s 5A playoffs.

It was a night of mix reviews for the Oxford offense, that matched their season average of points plus one. Once again it was a dual quarterback offense with both John Reece McClure and John Mark Meagher taking the reigns.

After a three and out in the opening drive led by McClure, Meagher came in for the Chargers’ second possession and marched them down the field in 10 plays, capped by a three-yard run by senior running back Hiram Wadlington for the 7-0 lead midway through the opening quarter.

McClure and Meagher would continue to alternate throughout the game.

The other eight points came from two field goals by Jack Tannehill of 22 and 43 yards, respectively, along with a Grenada (0-3) safety when a punt rolled through the back of the end zone in the first quarter.

While the offense was doing their job, the defense continues to make life difficult for opposing offenses. After shutting out Starkville in the second half of last week’s double overtime loss, Oxford did not allow Grenada to gain any traction throughout most of the night.

In the first half, Grenada averaged 4.8 plays per drive. Oxford took advantage of three takeaways (2 fumbles and an interception by DaDa Parham) while forcing Grenada to have two turnovers on downs. One came on the first drive of the second half. Grenada marched all the way down to the Chargers’ six yard-line — their most successful drive of the night — and on a 4th & 6 attempted a jump pass which went over the head of the Grenada receiver in the end zone, falling incomplete.

Oxford has shutout their opposing offenses two out of the first three games (Vicksburg’s lone score was a pick-six interception).

“A couple times we let (Grenada) into the red zone, but we stepped up big,” Cutcliffe said. “Grenada was able to run the ball a little in the second half and that’s’ something we’ll have to work on. But, hats off to our defensive coaches and the gameplay they put together. Great job by them and great job by the players.”