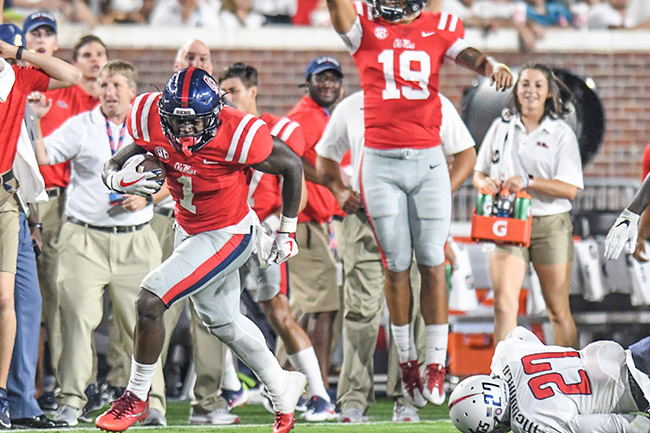 The receiving corps at Ole Miss has dubbed itself NWO (Nasty Wideouts) and no, it does not include the likes of Hulk Hogan, Scot Hall or Kevin Nash from the fame WCW days of old. This includes A.J. Brown, D.K. Metcalf and DeMarkus Lodge, just to name a few.

On Saturday night, Brown and company showed just how nasty they were, racking up 429 yards in Ole Miss’ 47-27 season-opening win over South Alabama at Vaught-Hemingway Stadium. They even have a championship belt they carry around the sideline.

Brown did most of the damage, slicing up South Alabama’s secondary for a school record 233 yards on eight catches for two touchdowns. He broke a record set by Eddie Smalls in 1993 (210 yards vs. Vanderbilt). His longest receptions of 71 and 77 yards each went for touchdowns.

“We see it everyday. Now it’s time to show the world,” Brown said of the receiving corps’ potential.

Shea Patterson went 28-for-35 and tossed four touchdown passes. DeMarkus Lodge was the recipient of the other two. Former Oxford High standout D.K. Metcalf caught eight passes for 84 yards while Lodge had 51 yards on five catches.

The run game was not stellar, but the Rebels group of backs totaled for 102 yards and a touchdown. D’Vaughn Pennamon rushed for a team-high 34 yards on seven carries and a score. Jordan Wilkins and Eric Sweeney both had 29 yards on eight and six carries, respectively.

Head coach Matt Luke knew exactly who to credit for the second half surge.

“He sparked us,” Luke said of Brown. “He made a lot of huge plays.”

“I was really happy to see our defense bow up their neck down in the tight red zone,” Luke said