Start of season brings sense of normalcy for Ole Miss 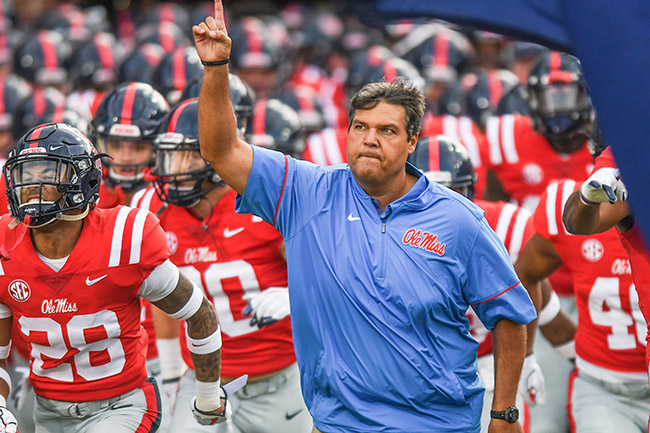 Ole Miss coach Matt Luke leads the team onto the field for the game against South Alabama at Vaught-Hemingway Stadium in Oxford, Miss. on Saturday, September 2, 2017. (Bruce Newman, Oxford Eagle via AP)

The questions weren’t all that new to DaMarkus Lodge. He just hadn’t heard these kind in a while.

After Ole Miss’ 47-27 win over South Alabama on Saturday at Vaught-Hemingway Stadium, the Rebels’ junior receiver was interrogated. About his five-catch, 51-yard, two-touchdown performance. About how the he and the rest of Ole Miss’ pass-catchers, who lived up to their “Nasty Wideouts” nickname position coach Jacob Peeler has given them by catching 429 yards worth of passes, were able to be so effective against the Jaguars’ defense. About Shea Patterson’s knack of extending plays with his legs to get some of those passes off.

“It was very refreshing,” Lodge said. “Everybody did all the talking all offseason about what was going on in this program, and we finally got our chance to go out and talk tonight. It was pretty fun.”

It was a break from the kind of inquires that became the routine during that noisy offseason to which Lodge was referring.

The developments in the NCAA’s long-running investigation were the talk of college football, and Ole Miss’ players couldn’t escape the chatter. From team morale to the bowl ban that’s already been self-imposed to losing their head coach following Hugh Freeze’s sudden resignation to what could still be coming, they spent the last handful of months fielding far more questions about what’s going on off the field than on it.

And there could be more.

Next Monday, the focus will shift to the Embassy Suites in Covington, Kentucky, where Ole Miss will get its proverbial days in court when it begins its hearing with the NCAA’s Committee on Infractions. School administrators will fight a majority of the 15 Level-I infractions that have been alleged against the program, including the failure-to-monitor charge against Freeze and lack of institutional control, in an effort avoided that dreaded multi-year postseason ban.

The COI usually issues its final verdict in these cases six to eight weeks after the hearing, which, if that timeline sticks, means Ole Miss could have its season interrupted by more sanctions in early November if the committee decides to add on to the program’s self-imposed penalties.

On Saturday, that all took a backseat to the Rebels’ more usual routine this time of year. Players and coaches made their walk from the Grove to Vaught-Hemingway Stadium through a sea of Ole Miss faithful that didn’t seem deterred by the circumstances, and Ole Miss played a football game two hours later.

“It just felt like a normal Saturday,” safety Jaylon Jones said. “I have to be reminded that we have a bowl ban.”

Patterson threw passes to the Rebels’ next wave of talented receivers that were way too much for South Alabama’s secondary to handle, specifically A.J. Brown, who needed just eight catches to shatter Eddie Small’s school record for receiving yards. Brown found the end zone twice while D’Vaughn Pennamon and Jones also scored touchdowns.

“It just felt like a huge relief,” Patterson said. “With all that’s going on, we just wanted to come out and do what we love.”

Linemen blocked, linebackers and defensive backs covered, and the entire defense tackled, though there’s plenty of room to improve in those areas. Nothing is where it needs to be after one game.

But for a team that’s embarking on a season that will be anything but, it all felt normal again.