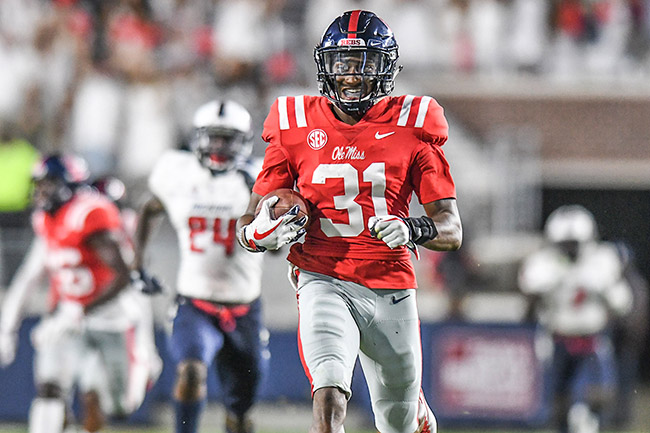 Having already fielded a pair of kickoffs for touchbacks, Jaylon Jones was getting antsy.

Ole Miss’ sophomore defensive back finally got a chance to return his first kickoff in college in the second half of Saturday’s game against South Alabama and didn’t let it go to waste.

Jones raced 97 yards for a touchdown, further igniting the Rebels’ late surge in a 47-27 win in their season opener at Vaught-Hemingway Stadium. His return immediately answered a South Alabama field goal that cut Ole Miss’ lead to 26-13 and swung momentum back in the Rebels’ favor for good.

“He’s got a knack for that,” Ole Miss interim coach Matt Luke said. “I thought that was a big momentum play in the game.”

Jones credited his blocking for giving him the necessary crease, adding he “just hit it” when he saw room to run.

“There were two kicks where I had to knee the ball and I really wanted to bring it out,” Jones said. “I was just being patient and waiting for my turn.”

But Jones wouldn’t be returning kickoffs if not for some convincing in training camp.

Jones had not handled kickoff returns since high school and asked special teams coach Bradley Dale Peveto before the Rebels’ second scrimmage of camp to give him a look there. Peveto did, and Jones responded by taking his first kickoff to the house.

Jones recently moved from cornerback to safety and got second-team reps there in the win, but he’s quickly found another way to make an impact.

“(Peveto) said I had earned my spot,” Jones said. “First game, I took one. I hope I stay back there.”