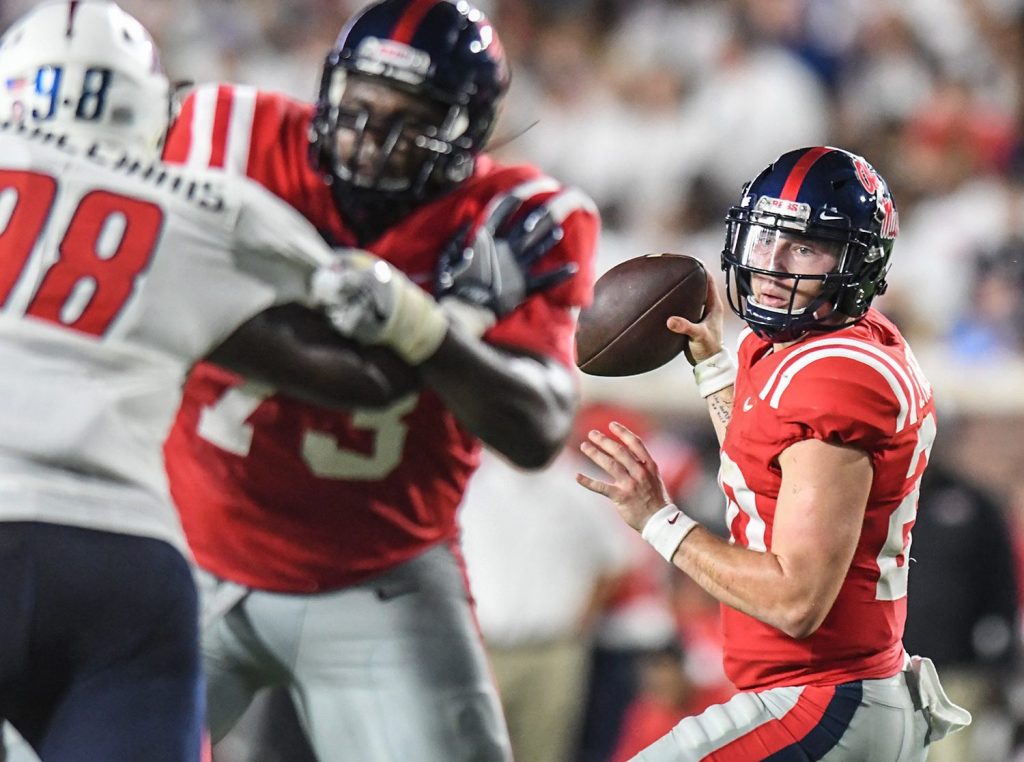 But not everything about Patterson’s game is quite that conventional, and Ole Miss’ coaches don’t want that to change about their young signal caller.

Patterson was sharp throughout the Rebels’ 47-27 win over South Alabama on Saturday, completing 28 of his 35 passes for a career-high 429 yards and four touchdowns in just his fourth career start. Most of those throws came within the flow of the first-year coordinator Phil Longo’s offense, but sometimes the former five-star signee had to improvise with his legs to avoid pressure and buy more time.

“Sometimes stuff isn’t there, and I think that’s what separates me from a lot of other guys,” Patterson said. “I like to extend plays and make throws downfield with my legs.”

Patterson’s ability to slither away from defenders and even reverse field to elude pressure has drawn comparisons to former Texas A&M Heisman winner Johnny Manziel. More times than not, Patterson is able to make something out of nothing.

During one play in the first half, Patterson escaped the pocket and scrambled toward South Alabama’s sideline before turning around and sprinting past a host of rushers as he made his way across the field and turned it up for what amounted to a 1-yard gain. Patterson’s instincts produced points in the second half.

With the protection breaking down around him, Patterson stepped up and fled the pocket. As he approached his sideline, he spotted A.J. Brown, who was bracketed by a pair of defenders near midfield. Patterson uncorked a pass anyway, and Brown outmuscled the underneath defender for the ball before outracing the rest of South Alabama’s defense to the end zone for a 77-yard score.

That elusiveness is so much a part of Patterson’s game that he and his receivers practice it.

“We work on the scramble drill,” Brown said. “He just runs around because he’s going to run around. He likes to run.”

But Patterson isn’t always able to run away from everybody. Twice he was caught outside of the pocket and brought down while trying to throw the ball away at the last second, the latter resulting in an intentional grounding penalty in the second half for one of the South Alabama’s two sacks.

Holding the ball that long against the faster defenses he’ll see in the Southeastern Conference could expose Patterson to more hits than usual. More seasoning, interim coach Matt Luke said, should help Patterson know when to press the issue and when to play it safe in the future.

“I think you do worry about it, but that’s what makes him special,” Luke said. “I don’t think you can take that away from him. I think as he gets more experience, he’ll learn when he can and can’t do those things.”

But Luke wants Patterson to stay true to himself more than anything, which means taking the good with the bad that comes with the quarterback’s versatile skill set.

“I don’t think you want to try to harness that because that’s his playmaking ability and that’s what makes him unique,” Luke said. “I think he’ll make a bunch of plays doing that.”