I know all the arguments against playing the lottery, starting with the most obvious: The odds of hitting a big winner are ridiculously small.

Infinitesimal, even: Mega Millions, one in 258 million; Powerball, one in 292 million. Death by armadillo attack may be a stronger, though less appealing, possibility.

And yet, from time to time, I take the plunge. Is it the most sensible purchasing choice I make? No, it is not.

A study committee appointed by Speaker Philip Gunn is currently looking into the prospects of making it easier for Mississippi residents to be similarly unwise.

Forty-four other states – and the District of Columbia, Puerto Rico and the U.S. Virgin Islands – already offer lotteries. Included are neighboring Louisiana, Arkansas and Tennessee, and it’s a safe bet that more than a few Mississippians find their way across the state line to have a flutter, especially when the jackpots spiral into the “take this job and shove it” levels.

As it did for the recent Powerball winner Mavis Wanczyk in Massachusetts. She quickly packed in her job as a hospital worker after her $748 million bingo.

I suspect it wouldn’t have to be nearly that high for most Mississippians to tell the boss adios.

Last year, Americans spent $80 billion on lottery games – more than on music, books, movies, sporting events and video games combined.
It averages out to about $250 for every adult in the country, and not everybody plays, so clearly some folks are sinking a lot more.

Much of the opposition to such games comes on religious grounds, though I’m pretty sure “Thou shalt not Lotto” is not one of the Ten Commandments. Auxiliary admonitions are thought to apply, including the one about the love of money being the root of all evil.

That type of objection aside, others point to studies indicating that low-income people spend disproportionate amounts of their income on lottery tickets.

Simply put, lotteries take advantage of the people least able to afford them.

I’m sympathetic to the notion that poor people don’t need any additional hurdles placed in their path. And Lord knows, Mississippi leads the country both in poor people and in hurdles.

What Mississippi leaders will have to decide is whether the potential payoff to the state in terms of revenue is worth the potential damage a lottery could do to some of its vulnerable residents.

I’m no fan of the casinos that have turned portions of my home state into little versions of Atlantic City, but I lean pro-lottery.

My personal spending on tickets might average out to something like five bucks a month, an amount I’m pretty comfortable setting fire to, in effect. What does it get me?

A fantasy. A rather involved, detailed fantasy, including some generous philanthropy, in an effort to get karma on my side. I dream of millions. My biggest winning has been $10. I’m in the hole.

But fantasies have psychological value. And as for those ridiculous odds, and my willingness to ignore them: I buy two tickets instead of one, instantly doubling my chances of winning. To two in 258 million.

Like the lottery slogan says: “Hey. You never know.” 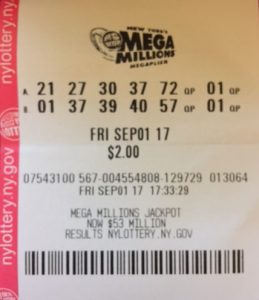 LOU community must stand against violence over Confederate statue…