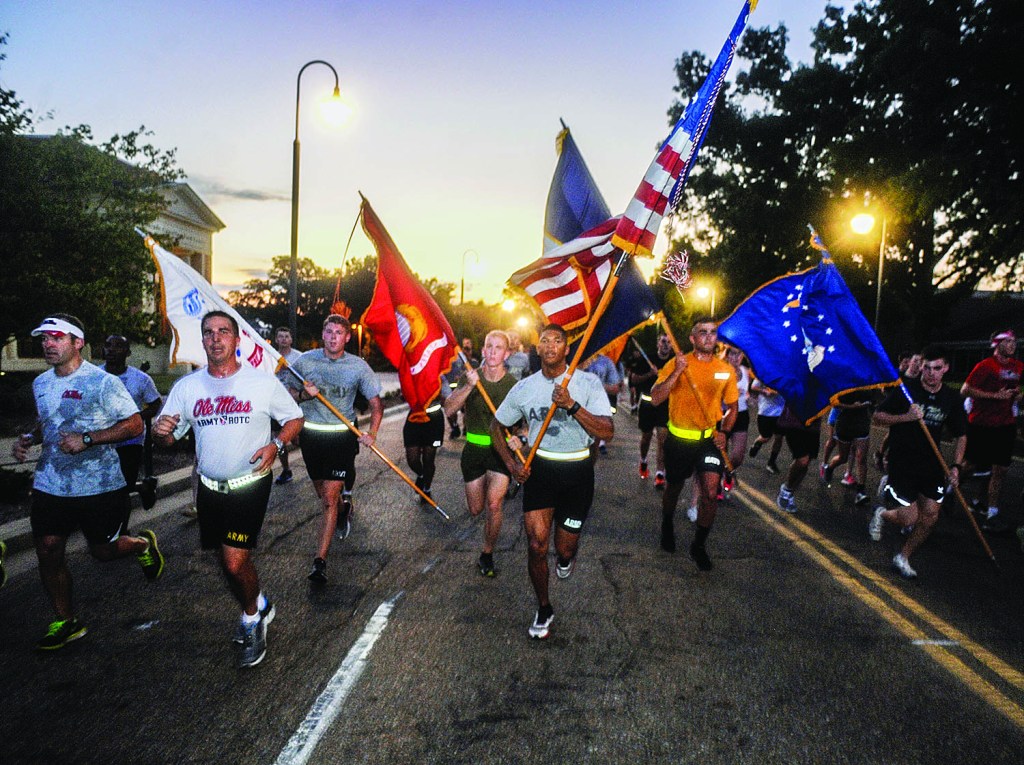 ROTC units at the University of Mississippi participate in the annual 9/11 Memorial Run in Oxford, Miss. on Friday, September 9, 2016. This year's run, starting at the Lyceum at Ole Miss, will be held on Monday, September 11, 2017 at 6 a.m. (Photo/Bruce Newman)

There is no better way to remember those that lost their lives on 9/11 than to honor the first responders, and veterans, that reside in our backyard. Volunteer Oxford, Lafayette County RSVP and TRIAD are helping to host two programs that are set up to honor both groups.

Teresa Faust, the director of Volunteer Oxford, has been organizing the 9/11 Day of Remembrance program since July. It will be held at the local Mississippi State Veterans Home on Sept. 11 at 10 a.m. Speakers include Oxford Mayor Robyn Tannehill and Lafayette County Board of Supervisors President Jeff Busby.

“This is an event to have the community come together in a way to remember 9/11 and we wanted to thank our first responders for what they do daily,” Faust said. “They put their life at risk for all of us without even thinking about it. We thank them every day, but this is one way to recognize them, as well as the veterans, for their call to service before 9/11 and after 9/11.”

Students in pre-K and kindergarten in both of the local school districts will get a visit from firefighters and police officers in full uniform for a safety preparedness demonstration. They will color pictures for the first responders as well. All other grades have been asked to write letters to veterans, soldiers for a project called Operation Gratitude. Faust thought there would around 1,000 letters submitted.

“They get really excited about it. We had one little girl tell us she didn’t know what to say and so we told her to think that one of them could be her family member that is fighting for your freedom right now so she could go to school,” Faust said. “She said ‘Oh, perfect. Dear Hero, thank you for saving the USA.’ And then signed her name. So, it’s something as great as that or saying thank you to a fireman or a police officer.”

There will be a parade of first responder vehicles held in front of the veterans starting at 11 that morning. Faust said it was a great way for the community to come to the veterans, who are more limited in going out more often than not.

Arledia Bennett, the director of RSVP, will be sponsoring an event that will take place on the Square right next to city hall from 9 a.m. until 1 p.m. RSVP will be helping to educate the public, and get the word out about National Preparedness Month by giving out disaster kits.

“We want to remind everybody how important it is to be prepared. With the floods that are going on in Texas, I heard one lady make the comment that she had some time to prepare for things she may have to take in case it was to flood at her house,” Bennett said. “This will be important things you need for the short term. It’s important to have your kids put one together with their special toy or blanket or something that can keep them entertained if you have to go to a shelter. The adults may need medication or flashlights. You never know the hours a disaster is going to happen. If you have your kit, and you have it close by, it’s easy to grab it and go.”

Some of the basic disaster supplies one should have in a kit are a gallon of water, per person, per day. Non-perishable food, battery or hand powered radio, first aid, a whistle, a manual can opener, wrench or pliers as well as a dust mask to help filter contaminated air, and duct tape to shelter-in-place. Cell phone chargers, and medication, are also high on the list for the kit. It’s also advisable to have food and any medicine needed for pets.

“It’s something simple and doesn’t take up much of your time to put together, but it’s so important in the long run,” Bennett said.

For Bennett, 9/11 is a time to reflect on those that lost their lives during the event. She thought the letters written by the children were a great personal touch to let the first responders know people are thinking about them.

“Those first responders were so important in getting the people’s needs met when they were in New York and outside of Washington,” said Bennett, who will have RSVP volunteers set up to help the veterans get outside for the parade. “It always makes me think just how much we need to appreciate our first responders. This is their jobs, their daily lives. They may not think about it being a time for special recognition because it’s what they do normally, but I just think it’s so important that we let them know how important they are to our everyday lives.”