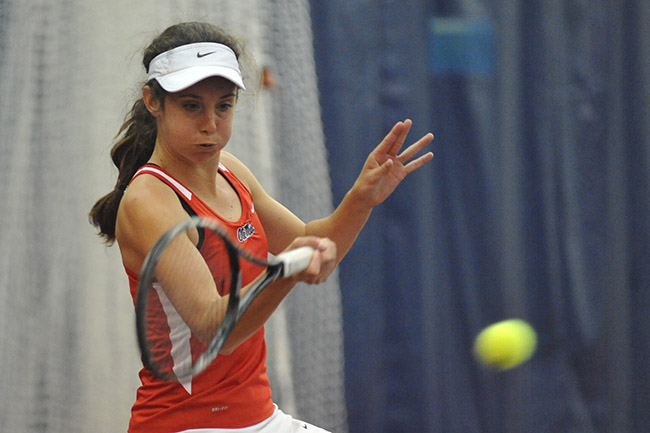 OXFORD, Miss. – Ole Miss All-American Julia Jones is back on the courts where she made a name for herself, serving as the Rebels volunteer assistant, head coach Mark Beyers announced Tuesday.

“We are extremely excited to add a Rebel great as our volunteer assistant,” Beyers said. “Julia has a great tennis mind and understands exactly what it takes to be successful in the SEC.”

Jones enjoyed an outstanding career for the Rebels from 2012-15 including earning All-America honors as a senior in 2015 and finishing the year ranked No. 12 in the nation in singles. She was named the 2015 ITA National Most Improved Player of the Year and the ITA Southern Region Senior of the Year. Jones earned All-SEC honors twice and helped the Rebels to four straight NCAA appearances during her career. In addition, Jones became the seventh player in program history to achieve 100 career wins.

Off the court, Jones was a tremendous student-athlete earning ITA Scholar-Athlete honors all four years and being named to the SEC Academic Honor Roll every year. She graduated in 2015 with honors in accountancy.

After graduation, Jones played on the pro circuit for a year and won her first professional singles title in Egypt in the summer of 2015.

“I am super excited to be back in Oxford and thankful that Mark gave me the opportunity to help out this year,” Jones said. “I love the college tennis atmosphere and I am excited to experience it from a coaching perspective. I learned a lot my four years playing here as well as the year I played professionally, and I hope to be able to use the knowledge and skills I gained to help the next generation of Ole Miss players.”

The Rebels return six of the top seven from last year and added freshman standout Sabina Machalova (Zlin, Czech Republic). They will kick off the fall season in a little more than two weeks from now at the Furman Fall Classic in Greenville, South Carolina and the ITF Futures in Stillwater, Oklahoma.