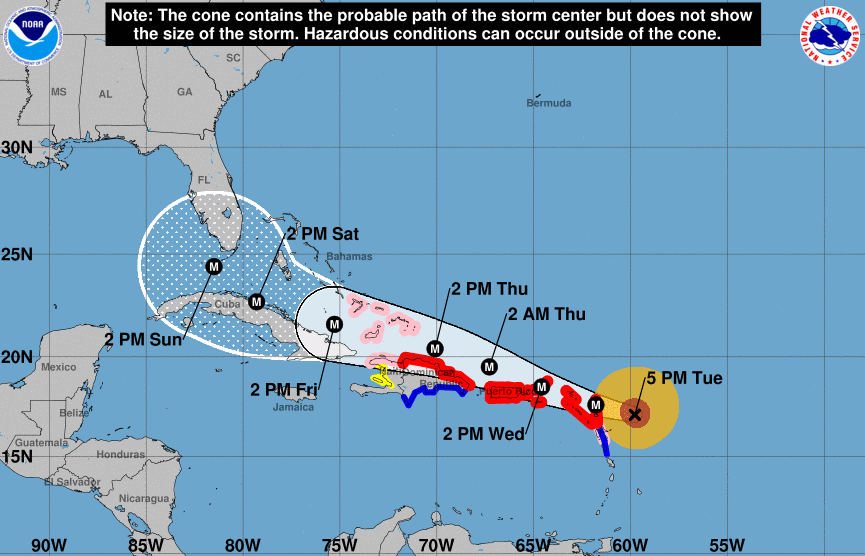 The latest Hurricane Irma path updates 2017 suggest the storm is still tracking toward a Florida strike late this week or early next. (NOAA)

PUERTO RICO — The latest on Hurricane Irma (all times local):

The Hurricane Irma path 2017 continues to develop toward Florida, putting the United States and one of its largest states on alert.

The latest forecast models from the National Hurricane Center show that Irma has taken a more southerly track than initially anticipated, putting Florida in the path for a potential direct strike late this week and early next week.

Models differ but everywhere from the Florida panhandle, includes areas in the 30A corridor, to Tampa and the heart of Florida, are in jeopardy. The Irma storm track will have to be watched closely, but forecasters still believe it will eventually be steered north, but that may not occur until it reaches the Gulf of Mexico.

Puerto Rico’s governor is warning that the effects of Hurricane Irma could be catastrophic, calling the storm more dangerous even than Hurricane Harvey, which recently devastated Houston.

Gov. Ricardo Rossello said Tuesday that the “dangerousness of this system” has never been seen in Puerto Rico.

In his words: “It is much more dangerous than Harvey. The results could be catastrophic and devastating.”

Rossello says the winds of the Category 5 storm will lash Culebra island around dawn Wednesday and move to Puerto Rico shortly afterward. He says the U.S. territory’s northeast coast will feel the brunt.

The U.S. Army Corps of Engineers is releasing water from Florida’s Lake Okeechobee in preparation for Hurricane Irma’s expected arrival in the state this weekend.

Spokesman John Campbell said Tuesday the plan is to drain the lake for three days to drop its current level of almost 14 feet.

The corps says Irma could add a foot of water directly to the lake as it passes and then 3 feet of runoff in the coming weeks. The corps tries to keep the lake below 16 feet and worries about the stability of the Hoover Dike, which surrounds the lake, if it exceeds 18 feet.

Most of current dike was built in the 1960s. It averages 30 feet in height. Failures of the original embankments during hurricanes in 1926 and 1928 killed over 3,000 people when waters flooded neighboring towns. About 40,000 people live nearby today.

The dike has been undergoing a $1.7 billion improvement plan that should be finished in the mid-2020s.

People in the Florida Keys are putting up hurricane shutters and wooden boards on homes and businesses as powerful Hurricane Irma approaches the Caribbean on a path that could take it to the U.S. by the weekend.

Trucks are hauling away boats and people are packing in preparation for leaving. Houses in the Keys stand at sea level, with parts of the main road to the Florida mainland going dangerously low.

At a trailer park, Janet Roberts was getting ready Tuesday to head to her daughter’s house in Florida City on the mainland after officials ordered residents and tourists to evacuate the area.

Roberts says she is terrified, saying she lost everything when Hurricane Andrew hit south Florida in 1992. In her words, “This has Andrew beat. This is really bad, really, really, really bad.

Some small Caribbean islands are bracing for a big hit from Hurricane Irma.

Forecasters say those in the path of the Category 5 storm include tiny Anguilla as well as the islands of Barbuda and Anegada. All will be near or directly in the path of Irma.

Anguilla is British Island territory of about 15,000 people. It is a low-lying island known for its smooth sandy beaches.

Authorities are expecting the eye of Irma to pass directly over Anguilla early Wednesday.

Meade says four shelters are opening on the island Tuesday though people tend to stay with friends and family.

Florida Gov. Rick Scott is ordering the suspension of road tolls across the state as Hurricane Irmacontinues its ominous move toward the region.

Scott says tolls will be suspended to keep traffic flowing as residents begin to evacuate coastal areas in the potential path of the dangerous Category 5 storm.

The governor adds that tolls will remain suspended “for the duration of the storm’s impacts to Florida.”

Several important Florida highways are toll roads including the Florida Turnpike, which runs from 60 miles north of Orlando all the way to Miami-Dade County.

The University of Central Florida has moved its football game against Memphis up a day as a precaution due Hurricane Irma.

The UCF athletic department says the home game will be played Friday at 6:30 p.m. at Spectrum Stadium in Orlando.

The American Athletic Conference opener was originally scheduled for Saturday at 8 p.m.

The school also announced Tuesday that there will be no tailgating. Parking lots and the stadium will open for fans at 5 p.m.

Water and basic foodstuffs are flying off the shelves of some stores in Florida as residents stock up ahead of Hurricane Irma.

Pablo Rodriguez surveyed the empty water aisle at a Fort Lauderdale Winn Dixie with dismay, saying “I was hoping to get a few cases.”

The 65-year-old said he would have to try other shops, because “all the people are stocking up quick.”

Theresa Webster, 60, of Fort Lauderdale had heard water was sold out at Publix but still available at Winn Dixie, but there was none by the time she got there in the afternoon.

She was also stocking up on canned tuna, crackers and bread.

Said Webster: “I got some water already but I wanted more.”

Hurricane Irma is the most powerful storm ever recorded in the Atlantic Ocean.

The U.S. National Hurricane Center says the Category 5 storm has winds of up to 185 mph (297 kph) as it approaches the Leeward Islands of the northeast Caribbean.

Four other storms have had winds that strong in the overall Atlantic region, but they have been in the Caribbean Sea or the Gulf of Mexico where the usually warmer waters fuel tropical cyclones.

Experts say Irma’s strength is a result of unusually warm water for that part of the Atlantic.

Miami-Dade County’s mayor says residents and visitors should be prepared to evacuate Miami Beach and most of the county’s coastal areas as Hurricane Irma heads toward Florida.

Gimenez activated the emergency operation center and urged residents to have three days’ worth of food and water. The mayor reminded residents that tap water was a good resource, telling them to fill up bottles with tap water now.

All Miami-Dade County offices will be closed Thursday and Friday.

Officials in the Florida Keys are gearing up to get tourists and residents out of the possible path of Hurricane Irma.

Monroe County spokeswoman Cammy Clark says in a news release that a mandatory evacuation for tourists will begin at sunrise Wednesday. An evacuation plan for residents is also underway but a timetable hasn’t been determined.

Clark says government offices, parks and schools will close and there will be no shelters in Monroe County. The county’s three hospitals are also beginning evacuation plans.

U.S. 1 is only route in and out of the island chain off the southern peninsula of Florida.

Clark says residents and tourists should begin filling their tanks with fuel to prepare to drive to the mainland.

Scott says in a statement that the initial 100 troops will be stationed throughout the state. Some 7,000 National Guard members will report to duty Friday, when the storm could be bearing down on Florida.

Scott said Tuesday that the exact path of the storm is still unknown but officials “must prepare for the worst.”

On Monday he declared a state of emergency in all of Florida’s 67 counties.

Two hurricanes hit the state last year but neither was as powerful as Category 5 Irma is right now.

Antigua’s airport has closed with an ominous statement from local authorities as Hurricane Irmaapproaches the Caribbean island.

The statement from the V.C. Bird International Airport says it is shutting down Tuesday and advises all visitors and residents of the two-island nation of Antigua and Barbuda to seek protection from the “onslaught” of the Category 5 storm.

It closes with: “May God protect us all.”

The center of the storm was expected to start passing north of Antigua and near or over Barbuda on Tuesday night.

Tropical Storm Jose has formed in the open Atlantic far from land.

Jose is located to the east of Hurricane Irma, which is a powerful and dangerous storm heading toward Antigua and perhaps the U.S.

Jose is the 10th tropical storm of the season. It has maximum sustained winds of 40 mph (65 kph) and is about 1505 miles (2420 kilometers) east of the Lesser Antilles.

The Dutch government says it is sending about 100 marines to the Caribbean island of St. Maarten to help prepare it and two other small islands for the arrival of Category 5 Hurricane Irma.

The government said Tuesday that the first marines were flown from the island of Aruba to St. Maarten in a coast guard plane. Some then traveled on to St. Eustatius and Saba.

Two Dutch navy ships based in the Caribbean also are sailing toward the islands to provide help assessing damage and repairing vital infrastructure after Irma has passed.

St. Maarten is an independent former Dutch colony that still relies on the Netherlands for defense and foreign relations issues. St. Eustatius and Saba are overseas municipalities of the Netherlands.

Puerto Rico Gov. Ricardo Rossello says he has spoken to White House Chief of Staff John Kelly as he seeks to have a state of emergency declared in the U.S. island territory due to Hurricane Irma.

Rossello thanks Kelly in a tweet for “the attention given to Puerto Rico” as the storm approaches.

Puerto Rico has announced a number of steps in preparation for the storm, including a 24-hour ban on the sale of alcohol starting 6 a.m. Wednesday.

The government has also dispatched inspectors to stores throughout the territory to check for possible price-gouging.

The governor of the U.S. Virgin Islands says he has submitted an emergency declaration to the White House due to the approach of Hurricane Irma and is urging residents of the territory to take the storm seriously.

Gov. Kenneth Mapp says in a news briefing that he doesn’t want to frighten anyone but that forecasters predict the storm could skirt the territory or even pass directly over it.

Mapp says people in the islands may start to feel the storm’s effects around midmorning Wednesday.

American Airlines has added extra flights out of two Caribbean islands to get people out of the path of Hurricane Irma, a powerful Category 5 storm.

The flights were added in St. Maarten and St. Kitts and Nevis. Those are in addition to regularly scheduled flights Tuesday and Wednesday to Miami.

Both islands are part of the northern Leeward Islands and are under a hurricane warning as Irmaapproaches the region Tuesday.

American says it expects to make additional flight changes as it monitors the storm.

Hurricane Irma has strengthened into a Category 5 storm as it roared toward the northeast Caribbean on a path toward the U.S.

Authorities warned that the storm could dump up to 10 inches (25 centimeters) of rain, cause landslides and flash floods and generate waves of up to 23 feet (7 meters). Government officials began evacuations in certain islands.

Puerto Rico Gov. Ricardo Rossello warned that all decisions taken in the next couple of hours would make a difference between life and death.

States of emergency were declared in Puerto Rico, the U.S. Virgin Islands and all of Florida.