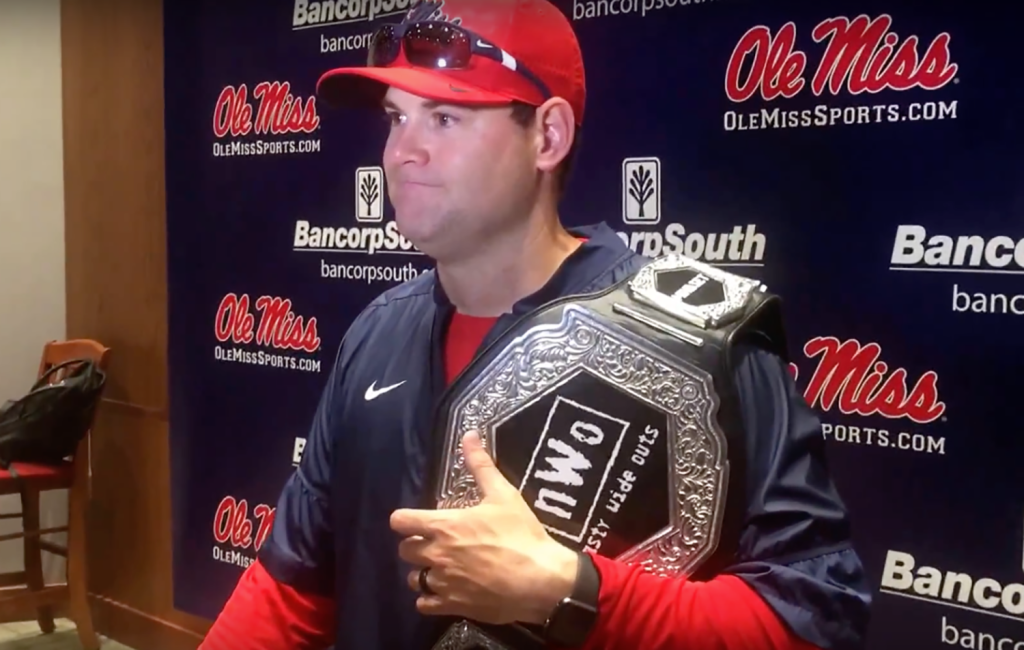 It has nothing to do with wrestling, but that doesn’t mean it can’t involve physicality.

In fact, getting possession of Ole Miss’ NWO belt could involve any number of criteria depending on the week, said receivers coach Jacob Peeler, who introduced one of the Southeastern Conference’s newest props upon his arrival at Ole Miss in January.

The belt went viral Saturday night when ESPN cameras caught receiver DaMarkus Lodge carrying it on Ole Miss’ sideline after catching his second touchdown late in the third quarter of the Rebels’ 47-27 win over South Alabama at Vaught-Hemingway Stadium. Peeler said he was looking for a way to build camaraderie among his new group of receivers upon being hired and ordered a replica heavyweight belt of the New World Order, the former professional wresting stable that originated in WCW.

He kept with the acronym by customizing it with the phrase “Nasty Wide Outs,” a mentality he immediately began instilling in his wideouts.

“I did a PowerPoint presentation and just explained kind of our tenacity,” Peeler said. “It’s a mindset that we’re going to walk on the field and we’re going to be the nastiest group on the field playing within the rules of course. But just kind of the way you carry yourself. When you walk in between those white lines, I want everyone to know who you are, and I think that’s something we take pride in. The guys really bought into it, and we enjoy it.”

The receiver that wins the most competitions throughout the week gets possession of the belt at the end of it, and the series of competitions rarely involves their performance on the field. Peeler threw out getting the highest grade on a test or winning a game of Madden as examples. It could be almost any kind of competition at any given time.

“We make it fun,” Peeler said. “It changes week to week and kind of depends on what I’m feeling that week. I just kind of throw it at them. They have no idea until they walk in. Some days, they don’t even know when it’s coming. It just happens. They compete for it.”

The winner for the first week was redshirt freshman Tre Nixon, who kept possession of the belt at the team hotel in Tupelo on Friday and held it during the team’s pregame walk through the Grove to the stadium Saturday. The belt is kept on the sideline during games, waiting to be delivered to any receiver that scores to enhance the celebration.

“We have a person that runs the belt to them, and they kind of do what they want with it,” Peeler said.

The race for the belt is on this week, though sophomore A.J. Brown has a leg up on the competition after setting a school record with 233 receiving yards against South Alabama. The belt is more about camaraderie off the field than individual performances on it, but Peeler admitted he may have to make an exception this week.

“It’s other stuff, but when you go out and play well, sometimes it’s hard to not give that person the gratitude or the ability to walk through the Grove with it,” he said.