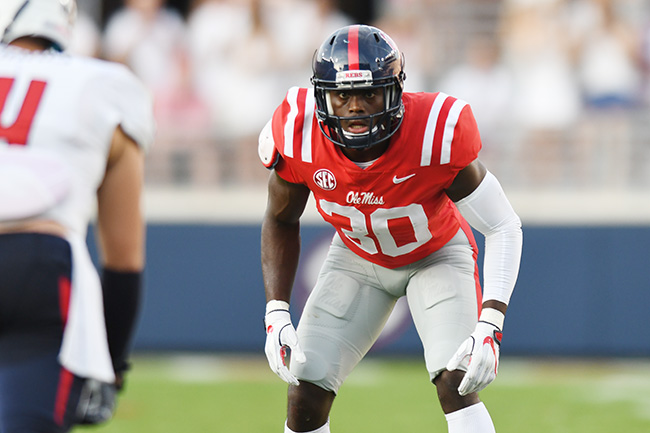 The defensive backs have had to bide their time in Ole Miss’ secondary the last three seasons but, like most everything else in their life, stuck together in their rise up the depth chart. That patience paid off in a memorable way for the twin brothers last week when C.J. and A.J. took the field together as starters against South Alabama for the first time since high school.

“Ever since high school, that was a dream,” said A.J., the Rebels’ nickel corner. “Now it’s a dream come true to be out there starting for the Ole Miss Rebels. We made it come true.”

A.J. and C.J. spent the majority of their first three seasons on campus as backups after signing with Ole Miss out of Bassfield in 2014. A.J. filled in at nickel corner for an injured Tony Conner for two games in 2015, but it was the only starting experience between the two before last week.

Playing behind the likes of Conner, Cody Prewitt, Mike Hilton, Trae Elston and Myles Hartsfield made playing time tough to come by early in their careers. A.J. tallied 42 tackles and five tackles for loss in his backup role last season while C.J. didn’t play at all after tearing a pectoral muscle last summer.

“I was down for a bit,” C.J. said. “I realized I had to cheer those guys on. So that was my role, just cheering them on and watching them play throughout the season.”

But Hartsfield was moved from free safety to cornerback in the spring while Conner exhausted his eligibility after last season, presenting A.J. and C.J. with their biggest opportunities. A.J. ran with the first-team defense at Star, or the nickel in first-year coordinator Wesley McGriff’s defense, while a healthy C.J. did enough to beat out senior C.J. Hampton at free safety. It culminated in a moment Saturday that’s been a long time coming for the two.

“It was a lot of fun,” C.J. said. “A lot of enthusiasm. Just going out there and flying around.”

The margin between the candidates for the second safety spot behind Zedrick Woods is small after McGriff said in camp that he wanted to see more separation at the position. Late in camp, coaches moved cornerback Jaylon Jones to safety where he’s already repping with the second team — an indication that gap is still narrow. 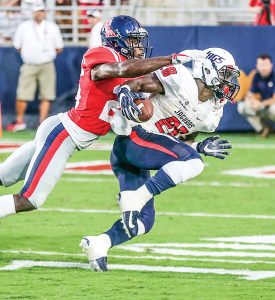 C.J. had a team-high eight tackles in the opener but said he’s still working to develop more consistency ahead of the Rebels’ game Saturday against Tennessee Martin at Vaught-Hemingway Stadium (11 a.m., SEC Network).

“I’ve made a lot of improvement, and I’ve got more to come,” C.J. said “Just tackling better. I’m working on that. I continue to do that. … Just watching more film, learning the next team and just being a step ahead.”

A.J. has a stronger hold on his starting spot at Star with reserve Cam Ordway and true freshman Breon Dixon backing him up. A.J. said his combination of coverage and run-support responsibilities aren’t much different than what he was asked to do at the Huskie position under former coordinator Dave Wommack, though he showed one difference in the first half against South Alabama when he recorded the Rebels’ only sack.

“I would say Coach McGriff likes to blitz me more, and I like that,” A.J. said.

The two are willing to do whatever it takes to stay on the field, preferably together.

“It’s really fun to have my twin brother out there on the field with me,” A.J. said. “We have great chemistry together. My family loves it. It’s pretty cool.”