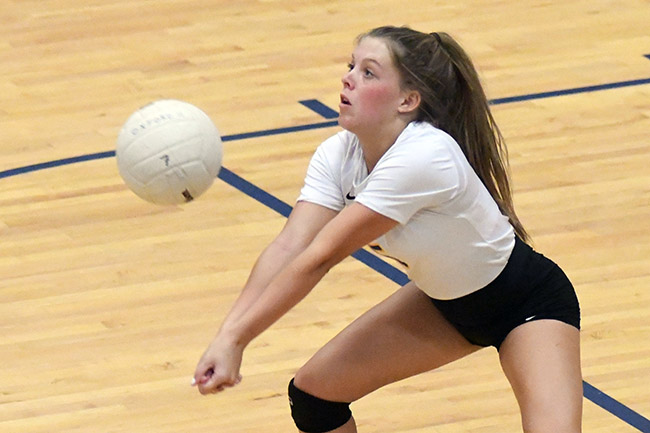 Oxford faced their toughest competition of the season and some uncommon issues made the challenge even more difficult.

It was a litmus test for Oxford (8-3) to see where they stood against premier postseason competition with the season a month over and only a month before the playoffs begin.
The exam did not go as planned.

“We’re struggling on that third ball. Getting that last ball in,” Oxford head coach Kacie Hengler said. “I knew that our defense was our only chance against (DeSoto Central). I knew they had a strong hitting team. But, I don’t think they have a strong a defense as we do. So, I think that’s our upper hand if we face them again in the playoffs.”

Each set was eerily similar to the previous one as DeSoto Central (12-1) would gain a slight advantage before Oxford found some momentum to pull closer to but could never keep hold of it.
The Jaguars proved to be disruptive to Oxford’s outside hitters, which in turn caused Oxford to never be able to properly set up for any kind of offense.

“We struggled in areas we don’t normally struggle in,” Hengler said. “It will be helpful if we play them again that those girls won’t struggle and play their better game. …Getting outside was a struggle with our outside hitters. We weren’t moving the ball around enough.”

A key stretch of games began on Tuesday with Oxford facing potential playoff teams in DeSoto Central and Tupelo in the next few weeks and they also dive into the heart of their Region 2- Class III schedule, hosting Columbus on Thursday and South Panola next weeks.