Boles Wiley Alley to remain as is — for now 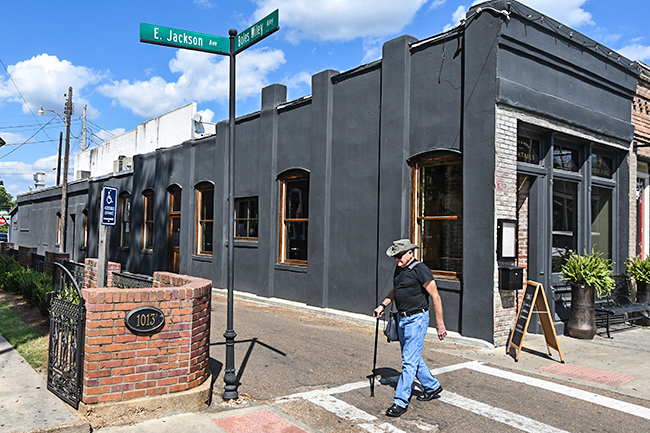 Boles Wiley Alley connects Jackson Avenue to the area where the city's parking garage will be built, in Oxford, Miss. on Wednesday, September 6, 2017.

It’s a little road with big potential to become the main entrance into the city’s first downtown parking garage for both pedestrians and vehicles.

But for now, it will remain the humble alley it currently is, providing access Jackson Avenue East to the current parking lot behind the Oxford-University Club for both pedestrians and vehicles, which means nothing will change in the near future.

Last week, the Downtown Parking Advisory Commission agreed the alley should remain open to both pedestrians and vehicles; however, with some changes and upgrades made to where the alley meets Jackson Avenue.

Sharpe said at first the commission agreed the alley should be shut off to vehicle traffic and made a pedestrian-only pathway to the garage.

“More recently, a suggestion was made to continue to use it as a vehicle thoroughfare to help move traffic into the garage from folks coming from the Square,” Sharpe said.

The plans called for removing about four parking spaces in front of St. Leo’s restaurant to create a right turning lane onto the Boles Wiley and creating a small pedestrian refuge area on the opposite corner.

The main entrance to the garage will be off Jefferson Avenue. Another entrance will be off Monroe Avenue, which the commissioner feels should be a right-hand turn only from both directions to avoid traffic back up on the Square.

Sharpe said the alley could be shut down at night to pedestrian traffic only when needed.

However, the aldermen decided to see how the intersection “works” once the garage is built and who is using it more often to get to the garage, pedestrians or vehicles and, at that point, review any recommended changes to the corner.

Sharpe also brought up a discussion on whether bathrooms should be added to the new garage.

“In the past, we’ve recommended there to not be restrooms in the garage due to safety concerns,” Sharpe said. “Recently, the mayor suggested we do add them.”

Sharpe pointed out two places on the garage site plan where bathrooms could be added to the building, but with access only from outside of the garage. The bathrooms would have three stalls for women and three for men.

“There is not a lot of enthusiasm for putting restrooms there,” Sharpe said. “The commission recommended to punt it back to the mayor and the Board of Aldermen to determine whether bathrooms are placed. We appreciate the need for public restrooms, but we’re concerned about safety with them being back behind these other buildings.”

Despite the commission’s concerns, the aldermen agreed to include public restroom in the garage plans.

Mayor Robyn Tannehill said the bathrooms would not be open 24 hours a day.

“We will work with Buildings and Grounds to create a regular maintenance schedule,” she said. “We deal with a lot the same potential issues right now with Faulkner Alley and other areas.”

Tannehill said the city has relied too heavily on private businesses to provide public access to restrooms.

“We are making an area for tour buses to park on the Square and we encourage Visit Oxford to plan these tours. We invite people here and we have a duty to provide public restrooms,” she said.