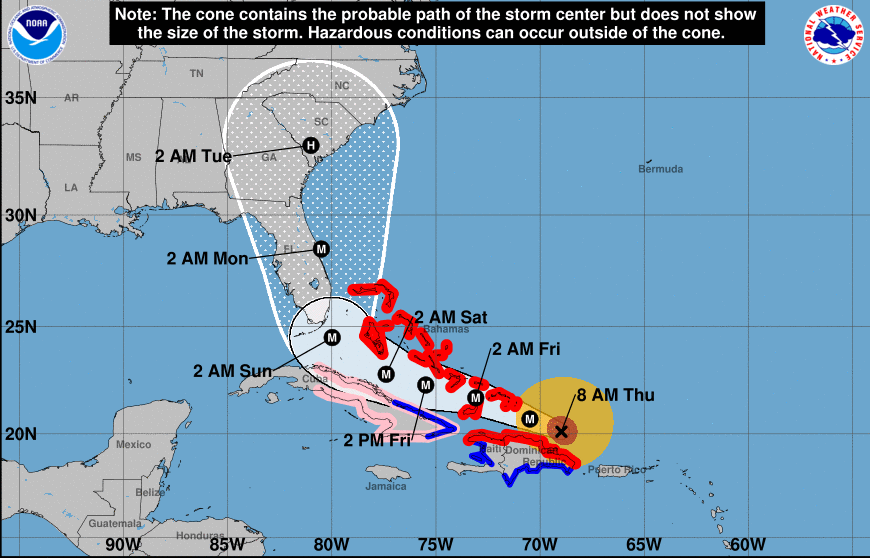 The storm could strike South Florida late this weekend as a Category 4 storm with powerful impact, updates reveal. Residents along the Southeast coast and eastern Gulf Coast, including Florida, Georgia and the Carolinas, should monitor the progress of Irma closely, according to The Weather Channel.

The storm will reach South Carolina and North Carolina as a Category 1 storm early next week, the latest hurricane forecast track models show.

“Early next week, the possibilities range from the center of Irma being located a couple of hundred miles east of the Florida or Georgia coastline to being in western Georgia,” according to weather.com.

“In addition, Irma’s wind field will be large, therefore, dangerous surf and coastal flooding will likely exist throughout the southeastern U.S. coastline even well away from Irma’s center by late week.”

In a news release Thursday, the highway patrol said extra troopers, road rangers and wreckers will be on the roadways to help drivers whose vehicles have become disabled.

The agency says disabled vehicles left on the shoulders of the highways would be towed starting Thursday morning to make it easier for emergency workers who are trying to reach crash victims.

Turnpike officials are also using cameras along the road to monitor conditions.

The Dutch Ministry of Defense says two military aircraft will fly to the Caribbean island of Curacao on Thursday afternoon loaded with relief supplies and troops to help authorities on former Dutch colony St. Maarten recover from the devastation of Hurricane Irma.

The ministry says the troops being sent to the region “can also be used to restore public order.”

Interior Minister Ronald Plasterk said earlier Thursday that he could not confirm news reports of looting in Saint Maarten, where a curfew is in force in the aftermath of Wednesday’s storm.

The ministry says a KDC-10 and a C-130 Hercules are to fly to Curacao from a military air base in the southern Dutch city of Eindhoven. The Hercules will then be used to ferry supplies to St. Maarten because it should be able to land at the badly damaged Princess Juliana Airport

The planes will carry enough food and water to supply the 40,000-strong population for five days.

The U.K. government says Hurricane Irma has inflicted “severe and in places critical” damage to the British overseas territory of Anguilla.

He told lawmakers on Thursday that the British Virgin islands have also suffered “severe damage.” On another British territory, Monsterrat, the damage is “not as severe as first thought.”

Britain has dispatched a Royal Navy ship carrying marines and army engineers to the affected islands.

Duncan says there are “unconfirmed reports of a number of fatalities” as a result of the hurricane.

The Dutch prime minister says Category 5 Hurricane Irma was a storm of “epic proportions” when it slammed into the former Dutch colony of Saint Maarten in the Caribbean and is appealing to Dutch citizens to donate to a relief fund set up by the Red Cross.

Speaking Thursday after a meeting of the government’s crisis committee, Prime Minister Mark Rutte said there are no reports yet of casualties on the Dutch side of the island. Rutte says the damage is huge, particularly on Saint Maarten, with “widescale destruction of infrastructure, houses and businesses.”

He says, “there is no power, no gasoline, no running water. Houses are under water, cars are floating through the streets, inhabitants are sitting in the dark, in ruined houses and are cut off from the outside world.”

The Dutch military is readying two aircraft to fly to the region to distribute vital aid to the shattered territory, which is home to some 40,000 people. However the airport on the Dutch side of the island is badly damaged.

Authorities say at least one person has died in the northeast Caribbean island of Anguilla, raising the death toll of Hurricane Irma to at least 10 as the Category 5 storm roars through the region.

The Caribbean Disaster Management Agency reported the death early Thursday and said 90 percent of roads in Anguilla are impassible.

France’s Interior Minister, Gerard Collomb, told Franc Info that at least eight people have died and another 23 were injured in the French Caribbean island territories of St. Martin and St. Barthelemy. That number is expected to rise.

In Barbuda, a 2-year-old child was killed as a family tried to escape a damaged home during the storm.

Authorities are struggling to get aid to small Caribbean islands devastated by the storm’s record 185 mph (298 kph) winds.

The eye of Hurricane Irma is moving west-northwest off the Dominican Republic’s northern coast as the Category 5 storm continues is destructive path over the Caribbean.

French authorities announced Thursday that at least eight people have died on Saint-Martin.

Meanwhile, in the Gulf of Mexico, Hurricane Katia has prompted a hurricane warning in Mexico in the state of Veracruz. That hurricane is centered about 195 miles (310 kilometers) northeast of Veracruz, Mexico. The U.S. National Hurricane Center says the storm is stationary with little overall motion expected though late Thursday.

French President Emmanuel Macron will go to the islands hit by Hurricane Irma as soon as weather conditions permit, after authorities announced at least eight people died on Saint-Martin.

Macron’s office said Thursday that the president will travel to France’s Caribbean territories “as soon as possible” once immediate rescue operations are complete.

The president of the territorial council, Daniel Gibbs, said on Radio Caraibes International that Saint-Martin is “95 percent destroyed.”

The island is part French, part Dutch. The Dutch government is holding a crisis meeting about the damage to its part, St. Maarten.

Damages and casualties were also reported on the nearby French island of Saint-Barthelemy.

Aerial images released by the Dutch Defense Ministry show scenes of utter devastation on the island of St. Maarten in the aftermath of a direct hit by Category 5 Hurricane Irma.

The island’s airport also was hit hard, with what appeared to be sand washed up to parts of the main terminal and the building’s roof extensively damaged. No aircraft were visible on the tarmac. The airport is famous around the world because its runway ends very close to a beach, where tourists can stand and watch landing aircraft skim low overhead.

Streets were largely deserted and littered with debris. At a port area, shipping containers were strewn like children’s building blocks. Elsewhere, yachts were shown jumbled together in a small harbor, some overturned or dumped, upside down, onto the shore.

The Dutch government is holding a crisis meeting to discuss its response to the damage inflicted on the Caribbean island of St. Maarten, a former Dutch colony, by Hurricane Irma.

Interior Minister Ronald Plasterk said early Thursday that ministers would huddle in The Hague to coordinate the aid operation after initial aerial images taken from a navy helicopter showed the extent of damage to the island.

Plasterk told Dutch NOS radio that there is “an extreme amount of damage, particularly on St. Maarten.” He said the government had no confirmed reports yet of casualties, but stressed that communications were proving difficult.

Video images tweeted by the Dutch Defense Ministry and taken from a helicopter flying over the island showed damage to the airport and the dock and seafront areas. Elsewhere, roofs had been blown off by the hurricane that struck Wednesday.

Speaking on French radio France Info, Gerard Collomb said the death toll in Saint-Martin and Saint-Barthelemy could be higher because rescue teams have yet to finish their inspection of the islands.

Collomb said Thursday: “The reconnaissance will really start at daybreak.”

Hurricane Irma is moving to the northeast of the Dominican Republic after blacking out much of Puerto Rico and raking the U.S. territory with wind and rain.

The U.S. National Hurricane Center says the Category 5 storm’s maximum sustained winds are near 180 mph (290 kph). The hurricane center says some fluctuations in strength are likely during the next day or two but Irma is expected to remain a powerful Category 4 or 5 hurricane.

Hurricane Irma has blacked out much of Puerto Rico as the dangerous Category 5 storm raked the U.S. territory with heavy wind and rain while staying just out to sea

Antigua and Barbuda Prime Minister Gaston Browne says nearly every building on Barbuda was damaged when the hurricane’s core crossed almost directly over the island early Wednesday and about 60 percent of the island’s roughly 1,400 people are homeless.

He says a 2-year-old child was killed as a family tried to escape a damaged home during the storm.

The tourist board for the Caribbean island of Anguilla says the major resorts on the island survived a hit from Hurricane Irma but many private homes have been damaged.

It also says that the airport did not sustain any major damage but that it remains closed along with two ports.

Irma lashed the small British island territory with heavy wind and rain Wednesday. There were no reports of any deaths from the storm.