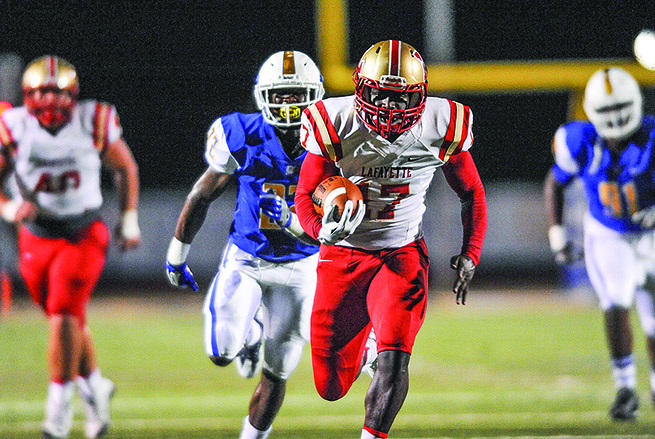 Lafayette’s Jamarcus Quarles (17) runs against Oxford at Bobby Holcomb Field in Oxford on Sept. 9, 2016. The teams will renew their rivalry Friday night at Lafayette. (Bruce Newman)

Last season Lafayette ended a four-year losing skid in the annual Crosstown Classic with a 23-3 win over Oxford, sparking what would become a 13-game winning streak all the way to the MHSAA Class 4A state championship.

This year is an entirely different story.

The Commodores are staring an 0-3 start right in the face and in search of their championship form. Head coach Michael Fair said after last Friday’s loss to North Panola that they were not playing Oxford this week, but playing themselves.

“I thought we’ve handled (the adversity) really, really well this week,” Lafayette head coach Michael Fair said. “Our kids are focused and locked in just like they were this time last year for the crosstown game. Our guys are really focused. …Our deal is to improve everyday. We can’t wait till Friday to improve. We have to improve at practice. I think we’re an improved football team and I can’t wait to go out Friday and just see how improved we are.”

Fair is experiencing his second ‘Crosstown Classic’ week at Lafayette while over at Oxford, head coach Chris Cutcliffe is also experiencing his second, but only as head coach. Cutcliffe has played in and coached against Lafayette — as an assistant coach for five seasons — 10 times prior to Friday. The emotions are different for him now than they were when he was quarterback of the Chargers.

“I don’t think you get caught up in that quite so much,” Cutcliffe said. “As a coach you’re just trying to do everything you can to make sure you play well. As a player I think there’s probably a little more of that emotion involved because it’s a rivalry game.”

Oxford (2-1) is riding momentum into Friday night, coming off a dominant 22-0 win over Grenada last week and in search of avenging their loss to the Commodores.

The two-quarterback system Cutcliffe has employed with junior John Reece McClure and sophomore John Mark Meagher has been successful. The duo has combined for 511 yards and five touchdowns through three games.

Meagher has also been lethal with his feet, rushing for 58 yards on 16 carries out of the pocket.

On the other side of the field, the quarterback situation has become murky, but is starting to sort itself out.

At the start of the season, Fair named junior Brandon Turnage his starting quarterback. An injury to his foot in the second quarter of their season-opener against Cleveland Central derailed those plans, putting Drew Dabney in. After lackluster success with Dabney, Fair has giving the reigns over to sophomore Randy Anderson.

Anderson completed eight of 13 passes for 58 yards and a touchdown in his starting debut.

“When Brandon went down it changes everything,” Fair said. “When your starting quarterback goes down and is not able to play quarterback they way you want him to because of an injury, it changes. It’s changed us and it’s changed us offensively. Randy is our quarterback and he gets better every single day.”