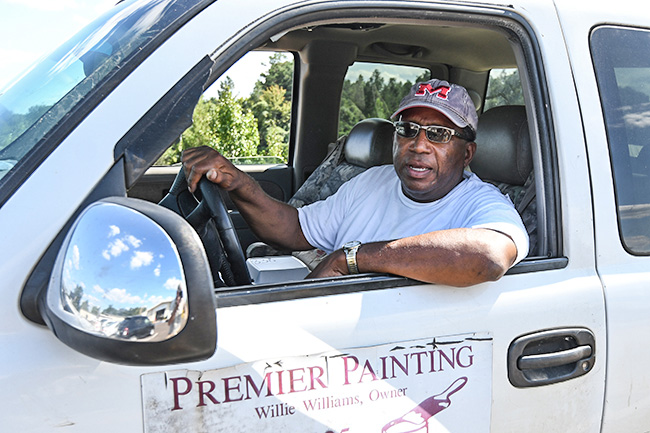 Willie Williams, in Oxford, Miss. on Thursday, September 7, 2017, is the owner of Premier Painting.

While speaking to the EAGLE Thursday, Willie Williams was causally listing off his recent medical conditions — a tumor the size of a grapefruit, stage 4 Non-Hodgkin Lymphoma, blood infections and a blood clot — when he stopped mid-sentence.

“Oh, that’s when I passed away,” he said before continuing the tale of his journey through life and death on the wings of faith.

Williams has been painting most of Oxford since 1967 with his company, Premier Painting.

“I think I painted most everything on that Square at some point,” he said with a chuckle.

In early 2016, his health started to deteriorate. A lump had formed on his shoulder that quickly grew to the size of a football and it was cutting off the circulation to his arm. He was diagnosed with Stage 4 Non-Hodgkin Lymphoma. Chemotherapy started. Then came two blood infections that sent him to the Intensive Care Unit at Baptist Memorial Hospital-North Mississippi for two weeks.

On a Sunday morning in February 2016, Williams was getting ready for church.

“You see, I had made a covenant with God that I wouldn’t be late anymore,” he said.

Before leaving his house, he received a phone call from a friend asking him to come to the BullsEye 95.5 radio station to give his testimony over the air. Not wanting to be late for church, he hesitantly agreed to do the show.

“When I was done, I went to church and the preacher’s wife had been listening to the show on her car radio,” he said. “She ran over to me and told me God had put it on her heart to pray for me. I felt something at my feet, and she was bent down washing my feet like Jesus did with the disciples. Now, looking back, I became a disciple of God right then.”

Not feeling well, Williams asked the elder’s of the church to pray with him after the morning service.

Tired and weary, Williams went home with the intent of watching the 2016 NBA playoffs but decided to go to bed.

“I went to take some Tylenol PM because that’s what I usually did every night but for some reason, I heard a voice — I know it was the Holy Spirit — that told me not to take the pills,” he said.

He woke up at 3 a.m. covered in sweat. He went to get some water when he collapsed on the floor. Crawling on his back using his elbows to the table to his phone on a nearby table, he dialed 911; however, he told the dispatcher the wrong address. He managed to call back and give the dispatchers the right address. Wanting to get to the door to unlock it for the paramedics, Williams slowly tried to crawl to the door — and that’s when everything went black.

“I knew I was dying,” he said. “I couldn’t get no air. My chest swelled up. Before I blacked out, I prayed a simple prayer — Lord Jesus save me.”

When he woke up at the hospital, the doctor looked at him in shock.

“You’re alive?” he said to me like he didn’t believe it. “He told me there was no way I was alive.”

A large blot clot and traveled from his leg into his lungs. The doctor told him if he had taken the Tylenol PM, he would have likely died in his sleep.

“I had no brain damage, no heart damage, no lung damage,” Williams said. “The doctor said it was a miracle.”

He spent two months in the hospital. Shortly after getting out, Williams had a feeling he should visit a local eye doctor’s house that he was friendly with and had recently painted his house.

“I had no reason to go but God put it on my heart to go,” Williams said.

While he was there, a woman there cleaning the house looked at him and started exclaiming, “Oh my Lord, it’s a miracle.”

The woman worked as a paramedic at night. She was on scene at William’s Taylor home the night the blot clot raced to his lungs.

“She told me when she got to me, I was ice cold and wasn’t breathing,” Williams said. “She told me I was basically gone — no signs of life at all.”

Williams, 61, said he was never afraid during the last two years of his life. He knew God was at the helm.

“I don’t ever worry. I ain’t ever mad or angry,” he said. “I had faith I was going to come through.”

Williams underwent a bone marrow transplant six months ago, and while painful, he knew everything was going to be OK.

Today, he is cancer free.

“I was really sick. I mean really, really sick. And I wouldn’t change a thing because I couldn’t be who I am now if I didn’t go through those things.”

“Before, I took things for granted,” he said. “I’m even a better painter now than I was. I pay close attention to details.”

William credits his faith and the love of family and friends in getting him through the toughest time of his life.

“You can’t let the disease know you have fear,” he said. “Believing in God and trusting in Him and in yourself is the key. God brought me some bitter water, but I didn’t drink the bitter water and I didn’t turn bitter. When you’re mad or sad, you open your body up to the disease and it finds a home in you.

“Just be strong, get your treatments and do what the doctor tells you to do and know God will make everything all right.”