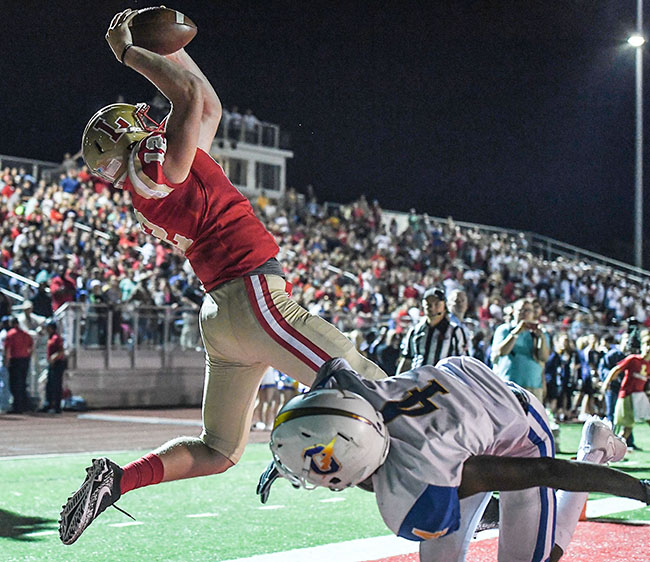 While the Oxford Chargers ran toward the rows of cheering fans with the Crosstown Classic trophy hoisted high above their heads, the Lafayette Commodores solemnly crowded around head coach Michael Fair.

Fair addressed positives in the team’s chemistry and effort but noted the team’s need for improvement as well. After the 41-17 loss to Oxford, this is the Commodores first 0-4 start in at least the last 17 seasons.

The Commodores are still very much in the playoff picture, as they haven’t entered district play yet, and have a much-needed bye week next on the schedule.

“We tell our guys that there’s three football seasons: Non-district, district and the playoffs,” Fair said. “So we’re through with the first one and we’re getting ready for district, so the second season hadn’t started yet, and we’re just trying to get prepared for it and use this off week to get us better.”

It won’t get any easier for the Commodores when they return from the bye week, with state powerhouse and current No. 1 West Point looming on the schedule to open up Region 1-5A play.

To make matters even worse, star athlete Brandon Turnage will not be able to return this season after suffering a lisfranc tear in his foot.

A key for the Commodores re-routing their season will be quarterback play, and sophomore Randy Anderson continued making strides in the passing game, completing 14 of his 29 passes for 105 yards and a touchdown, along with 58 rushing yards and one touchdown on 11 carries.

“We’ve asked him to throw it, and he has, he gets better every single day,” Fair said. “He’s a sophomore who’s very talented, he’s got a really high ceiling so we’re excited about him.”

While the Oxford Chargers have earned bragging rights for at least a year, Fair has seen his team make a little more progress each week.

“We’re getting better, and if we keep improving we’re going to be a good football team by the end of this thing,” Fair said. “I think that’s the key, and just keep improving day by day.”